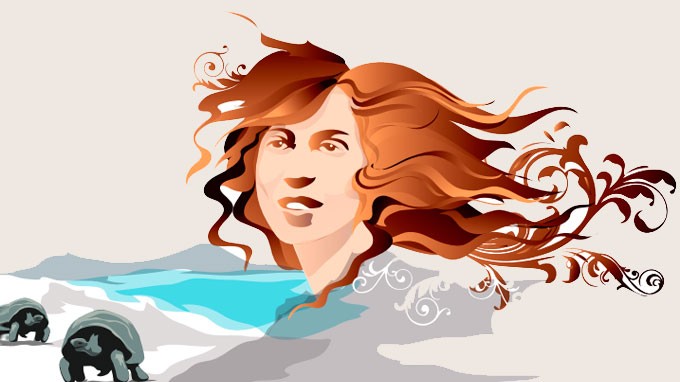 “We left the restless metropolis and journeyed away to the quiet of the ages, which has spread its cloak over Galapagos”
Baroness Wagner-Bosquet

Things would always be difficult in the Galapagos, but the winds of the future blew across the archipelago upon the arrival of its first Norwegian colonizers to Floreana Island. Although a very rough draft of European colonizing efforts had been analyzed in the late 1800s, it wasn’t until a series of idealistic descriptions (William Beebe’s “Galapagos, World’s End”, Gottfried Schnabel’s “Rock Castle Island”, and articles by Scandinavian journalists depicting beautiful springs at Asilo de la Paz in Floreana, caves with set furnishings, including a fireplace, carved into their volcanic structures and the abundance of wild fruit trees and game), that the idea of Paradise amidst the Pacific Ocean began attracting the fantasy of certain adventurous minds. In 1925, an entire colony of Norwegians willing to leave it all behind set out to ‘conquer’ the Galapagos, only to abandon their Floreana colony in two years. Another such colony at Santa Cruz, however, would remain.

By 1929, Germans Friedrich Ritter and his lover Dora Strauch escaped from their marriages in the real world to settle successfully at their wannabe love-nest on Black Beach, Floreana. To their dismay, three years later (1933), another German family, the Wittmers, followed, as well as a curious group of German-speaking socialites: Rolf Lorenz, Robert Phillipson, and the notorious Baroness Eloise Von Wagner. By 1934, four out of these seven Floreana neighbors disappeared or had died mysteriously (find an excellent account of the chilling story in “The Galapagos Affair” by John Treherne). The Wittmers would be the only ones to spend the rest of their lives on Floreana.
In 1937, the Angermeyers – four young artist brothers from Germany – arrived at Santa Cruz, escaping wars, economic upheaval, and the adult preoccupations of pre-WWII Europe. They headed straight for a land far and away from the difficulties of modern life, into the stuff of their boyhood fantasies. They, of course, found many challenges, but were also able, in the long run, to make their “Neverland” a new home.

Robinson Crusoe survived island life in fiction. The reality in the Galapagos is much cruder, and fantasies of colonizing the Enchanted Isles actually require an understanding of the fragile web of natural relationships that keeps things together within the islands’ extreme environmental conditions. Through greater awareness, new, more efficient, and harmonious ways to adapt to the Galapagos would be born. They led to the successful evolution of the wonderful creatures we can still witness throughout the archipelago. Why wouldn’t they work for the Galapagos’ human colonies, too? Man has also been part of that marvelous evolutionary process!

Denture perfect
In preparation for his self-imposed exile from the modern world on the Galapagos Islands, dentist Friedrich Ritter extracted all of his teeth and replaced them with wooden dentures. A nudist and strict vegetarian, he and his lover Dora caught worldwide media attention as a modern version of Adam and Eve. Ironically, Dr. Ritter would die, poisoned by meat, in November 1934.

The Empress of Floreana
Baroness Eloise von Wagner Bouquet sent articles to international newspapers that proclaimed her Empress of Floreana. She lived almost two years on the island, to the dismay of the two other family units sharing it with her. Described as a “megalomaniac”, a “sex-obsessed arrogant”, even a thick-lipped, yellow-teethed “caricature”, the Baroness, along with her lover Robert Phillipson, disappeared into thin air one fine day, a suspicious event that, due to her ill reputation, made everyone a suspect, and has remained a mystery to this day.

My Father’s Island
Author Johanna Angermeyer never met her father Hanz, one of the four Angermeyer brothers to settle on Santa Cruz Island. Forced to leave Ecuador to the United States during WWII, her mother Emmasha gave birth to Johanna in Lincoln, Nebraska. Her father passed away shortly after. The novel “My Father’s Island” is Johanna’s search to reunite herself with her past.