The Unique Wildlife of the Galapagos Islands 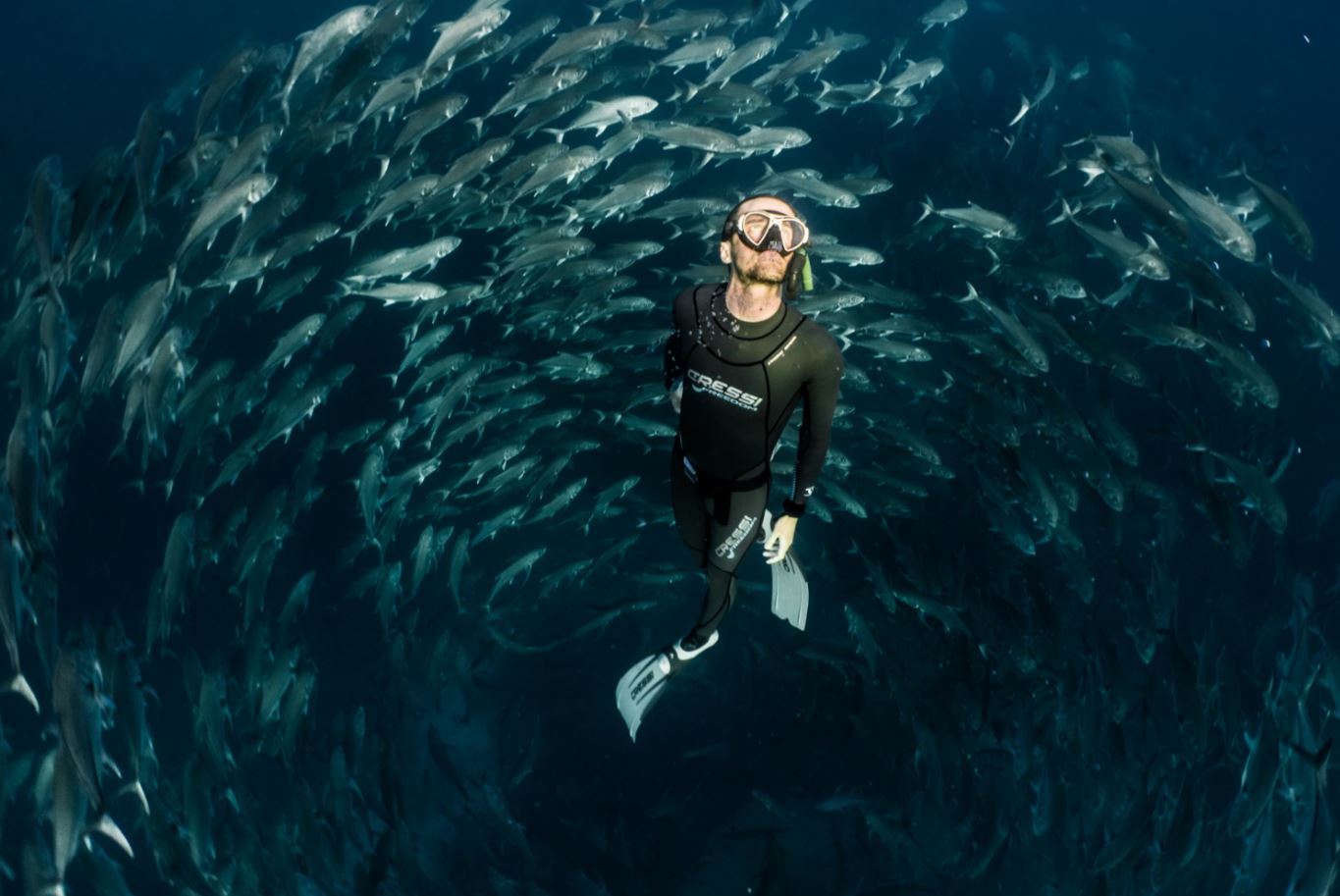 The Galapagos Islands are filled with a diverse collection of fauna, many of which you can’t find anywhere else in the world. It is not only a national park but also a marine reserve. Learn what you can expect to see on your Galapagos vacation, both above water and underwater. Since the release of Charles Darwin’s book “The Voyage of the Beagle” and also “The Origin of Species”, the Galapagos Islands have become a place synonymous with biodiversity. The isolated island chain emerged alone from the rest of the world, and island ecology developed in its own unique way. Today, visitors to the Galapagos can expect a one-of-a-kind voyage where they’ll see unique wildlife found nowhere else on Earth. This incredible unique wildlife of the Galapagos Islands includes everything from birds and fish to reptiles and mammals.

Learn about Unique Wildlife of Galapagos

The Galapagos tortoise is the first thing many people think of when they hear the name Galapagos Islands, and there’s a good reason why it’s gained such international fame. The islands themselves were named after them; “galapago” in old Spanish is the word for a horse-riding saddle. The tortoises’ shells do resemble the shape of a saddle, and thus the islands’ name: Islands of Galapagos. These creatures are quite unique wildlife as only in the Galapagos and Aldabra Island (an atoll off the Seychelles Archipelago) you can get to see them. They often live around 150-170 years, although no one has seen them at birth, grow old and die. It’s unlikely they arrived as giant animals, and from an evolutionary standpoint, it is quite unique to witness the environment that triggered such adaptations. In the Galapagos Islands, tortoises have no natural predators. About 15,000 tortoises populate the island chain today and it has been estimated that nearly 200,000 tortoises were found in the islands at one time.

Like the giant tortoise, the fur seal is one of the island chain’s endemic species. This furry creature is not found anywhere else in the world, and it’s recognized as the world’s smallest eared seal. The seals are well regarded for their outgoing demeanor and are regularly seen playing near sheer drop-offs, and rocky coastlines like those on Santiago, North Seymour, and Genovesa Island. The genus Arctocephalus refers to a bear-like skull; pictures confirm this.

Also endemic to the archipelago, the Galapagos sea lion is similar in many ways to the fur seal. The sea lions also occupy the shorelines but can be distinguished by their larger bodies, which are biologically similar to the California sea lion. They form large colonies on the beach and possess a friendly and inquisitive approach to humans. You’re likely to find them sharing your space on a snorkeling trip through the archipelago’s reef. They inhabit both rocky shorelines and beaches. They are found all over the archipelago.

A couple of flightless cormorants with its chick spotted in Galapagos.

The Galapagos Islands are home to strange and eccentric species that would have difficulty surviving anywhere else, and this is no more apparent than with the archipelago’s three most prominent species of flightless birds.

The flightless cormorant is the only species of cormorant that has lost the ability to fly, and it’s developed accordingly. It’s much larger than other cormorant or anhinga birds, and its size and inability to fly would make it a target for introduced predators like dogs and cats. It is only found on Fernandina Island and the west coast of Isabela Island.

The Galapagos penguins provide visitors with the only opportunity to meet a penguin north of the equator. They are similar to the emperor penguin in that the Galapagos penguins are monogamous and typically breed for life. They’re the only penguin species found on both hemisphere, the 2nd smallest in the world, and snorkeling with them is a true highlight. When was the last time you heard someone snorkeled with penguins?

Both species are endemic to the Galapagos Islands and found nowhere else on Earth.

They come in three styles: with blue feet, with red feet, and with a wonderful mask. Their names, respectively: blue-footed boobies, red-footed boobies, and Nazca boobies.

Blue-footed boobies are every bit as colorful and eccentric as they sound. Like the flamingo, the booby’s unique wildlife coloring is a symptom of their diet with the fish they eat turning their feet into a bright neon blue. Their mating ritual is characterized by a flamboyant and strutting dance that’s worth seeing. The Galapagos is home to over half the population of blue-footed boobies in the world. Best islands to spot them: Española and North Seymour.

Red-footed boobies, although the most numerous booby of all, remains as the least seen booby due to their feeding ecology: they use peripheral islands in the archipelago, and naturally, avoid competition with the other two species of boobies. They are the only booby in Galapagos that nests in trees and bushes, and this makes them quite unique. A webbed-footed bird upon a branch just like a crow? Best islands to spot them: Genovesa.

Nazca boobies are the largest species of booby in the islands. They show a black-face mask which gave them their former name: masked boobies. They nest on the ground and prefer closer access to cliffs and rocky shorelines, while their blue-footed relatives prefer more inland habitats. Best islands to spot them: Genovesa and Española.

Besides the Nazca boobies, there are two other species of boobies in Galapagos: Red-footed and blue-footed

This endemic species’ claim to fame is that it’s the only marine lizard still alive in the world. It’s the unique habitat of the Galapagos archipelago that allowed such unique wildlife to prosper. Their colorful scales are a remarkable sight with visible splashes of bright red and green-a trait seen only on Española and Floreana Islands. The largest colony of the bigger variety of marine iguana can be witnessed both in Fernandina and Isabela Islands. Scientists speculate that the lack of nutritious, indigenous vegetables forced the marine lizard to adapt to a marine diet. Special nasal glands in their nose allow them to filter out the salt they absorb while swimming and diving.

While Darwin was responsible for embedding the Galapagos tortoise in the popular subconscious, the island’s unique wildlife and variety of finches were most important to the modern founding of the theory of natural selection. Despite originating from a single species, 13 unique varieties of the bird populate the archipelago today. It was this unique controlled situation that allowed Darwin to develop his theory of evolution. Bird watching is popular throughout the islands, and the different species can usually be distinguished by the size and shape of their beaks. Explorers are never impressed by the finches’ plumages, but their beak variations are quite an example of adaptation. Best islands to see Darwin’s Finches: Santa Cruz, Española, Genovesa, and Isabela.

Aquatic Species of the Galapagos

The Galapagos Islands are a popular destination for cruises for good reason. The surrounding ocean is home to a vast and diverse collection of beautiful sea creatures. The island chain plays host to over a dozen species of Cetaceans (whales and dolphins), and while the islands are not really a whale-watching destination, encountering them is certainly a highlight. The real marine attraction, however, is for sure the snorkeling areas of the marine reserve.  The mix of species is quite bizarre: tropical & subtropical fishes, sea lions, fur seals, penguins, cormorants, and more. When was the last time you had all those creatures in the waters in front of you? The Galapagos is also a declared marine reserve, and after the Great Barrier Reef, this is the second-largest marine reserve in the World. If the islands deserve respect and appreciation for their land attractions and features, then the waters will never disappoint any explorer willing to see the less-known side of the archipelago. Top snorkeling locations: Gardner Bay, Champion Islet, Genovesa, North Seymour, Bartolome, Sombrero Chino, Rabida, Punta Vicente Roca, and Punta Espinoza.