Coming in at #10 on TripAdvisor’s Top 25 Beaches in the World for this year is Tortuga Bay, Galapagos. And with good reason. In this post, we invite you to discover why it is that so many travelers from around the world voted to have this beach cap off their top ten pieces of paradise.

Tortuga Bay is located on Santa Cruz Island, the largest island in the central region of the archipelago. The island itself is home to abundant wildlife and a spectacular slice of coast that holds a sense of tranquillity and oneness with nature unlike anywhere else. It’s capital, Puerto Ayora, is the most populated urban center in all of the islands. Despite the strong presence of civilization, however, an immaculate beach lies not all that far from here…

Many cruises, if not all, have Puerto Ayora as a pit stop as part of their Galapagos tours. It’s worth mentioning that the Finch Bay Galapagos Hotel is right around the corner as well.  While in town, you can stroll throughout the docks, pier, and town center and then visit the Charles Darwin Research Station (with its brand-new Lonesome George Exhibit!). This data-gathering location is a biological research station that is operated by the Charles Darwin Foundation. The main mission of scientists working there is to provide professional advising for conservation efforts in the Galapagos Islands. The most well-known effort at the center is the captive breeding program for giant tortoises, but other monumental efforts are taking place here too. Visitors can see baby tortoises in semi-captive conditions, as well as tortoises that are about four or five years of age and are ready to be repatriated to their home islands. 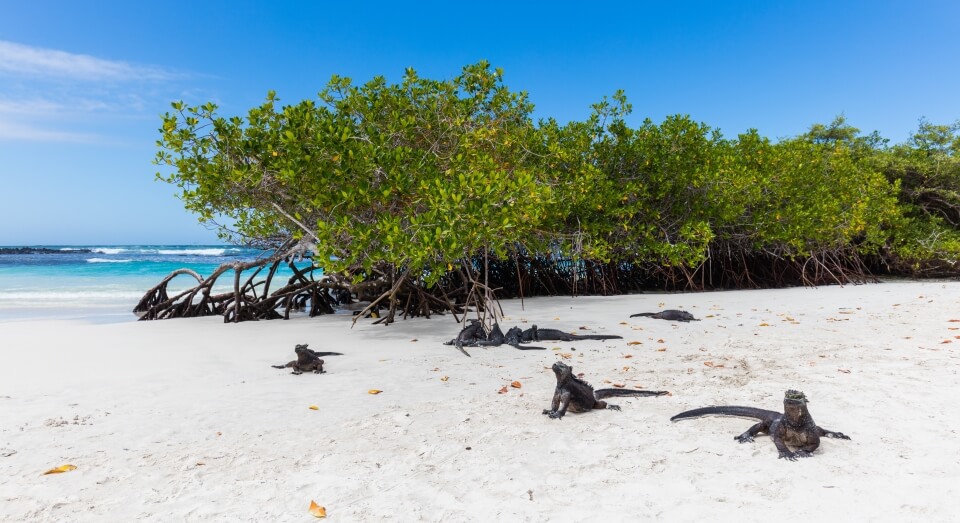 Tortuga Bay is one of the highlights of Santa Cruz Island.

Not many visitors to Santa Cruz get a chance to visit Tortuga Bay, due to a lack of time. Those that do manage to stay on the island for more than a day, however, are always strongly advised to check it out. It’s obvious why.

Many turtles inhabit the nearby waters, and some will come to land on the shores during their nesting season, hence its name. On the way there, you’ll get to stroll down a walkway (approx. 2.5 km/1.5 mi) among a giant cacti forest where finches come to feed on the attractive yellow flowers and Galapagos flora. As you get closer to the shoreline, the gentle sound of waves turns into a magical serenade of ambient music, summoning you to come closer. Since this recreational area is open to hikers and nature lovers alike (without the requirement of a guide), you can explore it at your own pace.

There are two large sandy environments here. The first bay is wide and open, where long sets of waves continuously roll and marine iguanas leave tracks in the sand as they look for shade. The second bay, which is at the very end of the first, is a secluded beach reserved for those who prefer a quieter location.  Your eyes can go wild here as you witness one of the few places on Earth where giant cacti meet the ocean and the tropical coast is dotted with mangroves. It’s a beautifully bizarre combination!

Tortuga Bay is protected and very calm. It’s no wonder why those who extend their time on the islands after an expedition cruise love it here. In some areas, big waves prevent you from swimming but in others, calm shallows will invite you to playfully splash around alongside the beach. You’ll also feel compelled to explore the rocky shorelines with your snorkeling gear, as marine life thrives well here (including sea lions and Sally-lightfoot crabs). Keep an eye on plunging blue-footed boobies as well! An aerial show may very well be happening overhead.