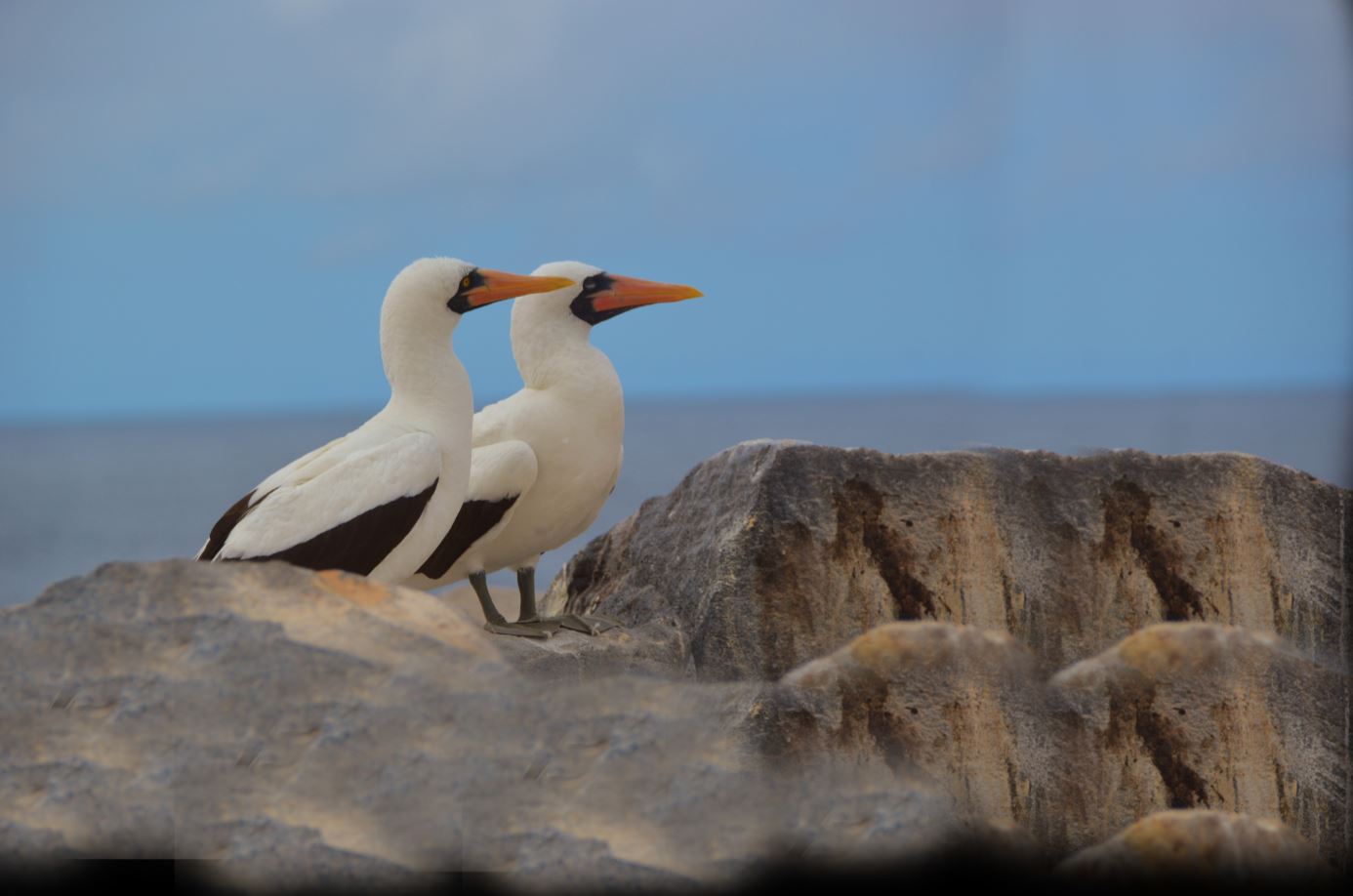 The avian term “booby” is typically linked to an odd little blue-footed bird that struts around the Galapagos Islands, or perhaps its slightly less popular relative, the red-footed booby. However, the largest of the boobies, the Nazca, is quite different in appearance from its colorful-footed relatives. Almost the entire head and body of the bird is an elegant white, with the tip of its tail and borders of its wings painted a rich brown-black, along with a delicate black mask around its eyes. Interestingly enough, the color of its bill varies between islands, but it is typically bright orange in males and rosy pink or pinkish-orange in females, standing out beautifully against its black facial skin. Its feet are a dull olive or blue-grey color.

Previously, the Nazca booby was thought to be a subspecies of the masked booby, which breeds along the Pacific Coast and northern South America (including the Galapagos Islands). However, in 2002 it was recognized as its own species. The masked booby has a notably yellower and shallower bill, and nests on low, flat areas, whereas the Nazca Booby uses cliffs and steep slopes for its nesting grounds.

Nazca boobies clutch one or two eggs, usually only one hatches and survives.

The Nazca Booby is an annual breeder; however, its breeding period varies depending on where the colony is located. On the Galapagos, eggs are typically laid on Genovesa Island between August and November, but that period runs from November to February on Española Island, for example.

During courtship, the Nazca Boobies display a rather peculiar dance ritual. The male begins with an action known as ‘sky pointing,’ stretching his beak towards the sky. The female then follows, as in agreement of the courtship. This dance serves to indicate where the nest will be located. The Nazca builds very simple nests. Instead of digging out a depression in the land like their blue-footed brothers, their nests consist of a simple ring cleared of debris and lined with guano, typically located on rocky ledges along cliffs.

Both parents share the responsibility of incubating the egg and feeding the young. As they do not have a brood-patch, they use their large webbed feet to incubate the egg for approximately 40 days. Females typically lay 2 eggs.

Nazca boobies can be seen in Genovesa, Floreana, and Española in the Galapagos archipelago

The Nazca booby, like its relatives, practices siblicide; however, it takes siblicide to a whole different level. While the female typically lays two eggs, the parents never raise two young. The first egg is normally laid four to nine days before the other. This asynchrony is directly proportional to the hatching asynchrony, which is among the longest of all birds. This delay is a death sentence for the second chick that hatches, as the first can easily push it out of the nest, and it does so in every case, without fail. Once outside of the nest, the parents do not acknowledge the unwanted chick and it quickly dies from either starvation, temperature change, or predation.

Siblicide is not uncommon among boobies. However, blue-footed booby chicks practice what is known as facultative siblicide, in which they kill the weaker chick only if there is not enough food. On the contrary, Nazca booby siblicide is obligate and unconditional. Experts are still not certain as to the cause for this unreserved murder between siblings. It is possible that the fierce trait developed as a result of recurrent food scarcity, as by killing its weaker sibling the older chick would be entitled to all of the resources that the parents bring. On the other hand, it is possible that the siblicidal allele was developed due to some past selection pressure, such as food scarcity, and was never lost.

Despite this incessant siblicide, the female continues to lay two eggs. This is likely to ensure greater reproduction insurance in the event that the first chick does not survive. Nazca boobies have a relatively high hatching failure rate, with 25% – 50% of their eggs failing to hatch. As such, the second egg ensures the reproductive success of the parents. Very little is known about why the boobies have such a low hatching success and intense siblicide. A further investigation like during the best Galapagos tour is required to answer these questions and learn more about the reproduction processes of the Nazca booby. However, both factors ensure that Nazca parents will only raise one chick and will focus their efforts entirely on its survival and success.