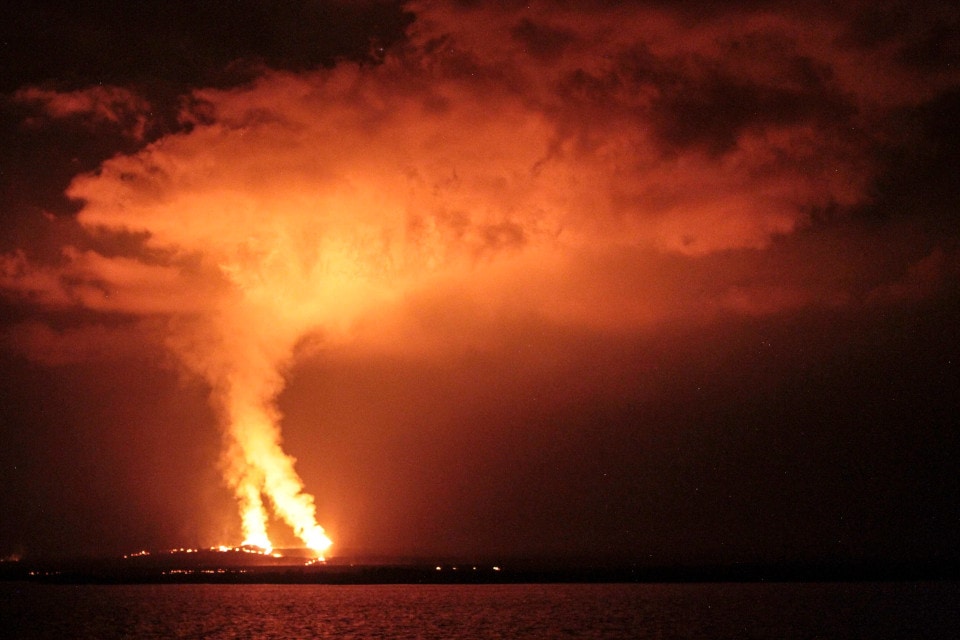 Last night, it surprised us again. Burning fire painted the sky with every possible shade of red as hundreds of stars shone brightly in the dark. Scorpio and Sagittarius were in awe witnessing Sierra Negra’s molten lava racing to the ocean; even Saturn peaked out through its rings to see this event! Nobody wanted to miss out on the raw and overwhelming power of nature.

Sierra Negra volcano started erupting three weeks ago.  In the beginning, it was an “on and off” type of event: one day it delighted us with its untamed force, the next day it returned to its dormant phase. Nevertheless, Sierra Negra hasn’t ceased to grace us with a non-stop eruption since last Thursday.

Watching the flames rise up in the sky reminded me of a song that I used to hear in my youth. The chorus was: “It is hot, hot, hot!” and it certainly was. Three particular interpretations of this chorus kept going through my mind: Hot as the hot spot, hot as something “cool” to see, and hot as the burning coals. So, as soon as we knew the volcanic eruption had been active for two days in a row, we headed south along the Bolivar Channel during our Western Galapagos Islands itinerary to get a closer look to the center stage: the place where lava flows were on full display.

Sulfur in the air

From the distance, all we could see were two red dots on the horizon. Actually, if we hadn’t been aware that the volcanic eruption was taking place, we could have sworn these were just two vessels passing by. However, as we got closer, the dots turned into lava-ejecting cauldrons! Mesmerizing rivers of molten magma flowed downhill, burning plants along the way and creating pahoehoe lava flows when they encountered a sudden obstacle. I knew we got as close as we could when the air started smelling like sulfur. 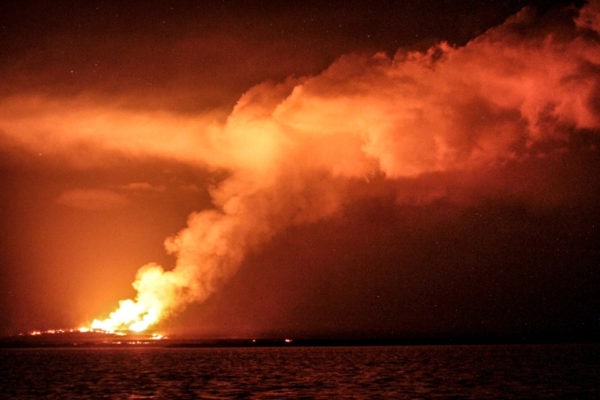 The sky turned red during the volcanic eruption.

Despite the chilly wind characteristic of this Galapagos season, everyone rushed outside, both guests and crew. The wisest wrapped themselves with blankets from their cabins. “AH’s!” and “OH’s!” could be heard all around the deck. Our guests couldn’t stop taking pictures on their cellphones and cameras, even though each one of us knew that those pictures couldn’t capture the magic of the moment we were living.

It felt”a once-in-a-lifetime event,” many said.

Towards the end of our visit, when we resumed our navigation, I stayed outside on the Sky Deck. The shallow water boiled, forming a dense horizontal cloud, and two columns of steam rose up into the sky. They interweaved forming a reddish braid as a gift to the stars for being present at this great spectacle. This incredible vision gave me –perhaps unwillingly– one of the most beautiful starry nights I can recall in recent memory.