The Dance of the Sally Lightfoot Crab 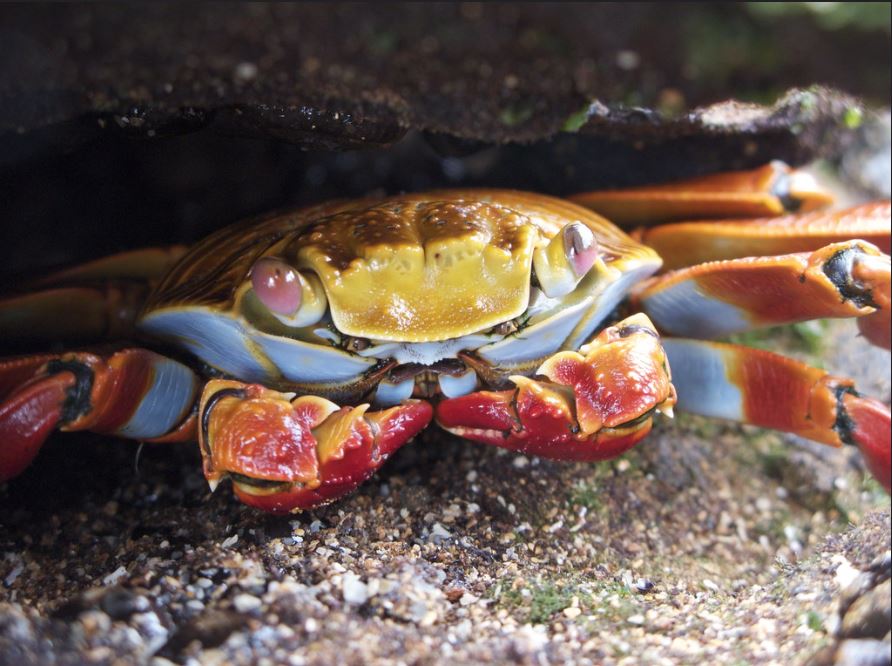 Saltwater crabs pervade almost every shore you visit, but in the Galapagos Islands, known for their unique biota and imbalanced fauna, there is only one species that really stands out from the rest – the Sally Lightfoot Crab. The crab is popular among tourists to the islands for its remarkable bright color and also its agility, able to dance among the deep black lava rocks and withstand the crashing waves of the Pacific.

The crab is rumored to have been named after a Caribbean dancer, thanks to its agility and her lightfoot way of dancing. The Sally Lightfoot crab has ten legs and is able to run in four directions. Additionally, their spectacular time reaction and speed makes it seem as if they could predict the mind of their predator, and also makes them next to impossible to capture. As writer John Steinbeck once commented in “The Log of the Sea of Cortez”, when it comes to catching the crab “His [man’s] tendency eventually is to scream curses, to hurl himself at them, and to come up foaming with rage, bruises all over his chest.”

The secret of survival is in their legs

However, their speed is extremely important to their survival. The Sally Lightfoot crab has a wide range of predators including octopuses, fishes, lava herons, moray eels, lava lizards, and even introduced rats, cats, and dogs, thus it has to be extremely agile in order to survive. This is also the reason they spend 2/3 of the day hiding in cracks among the rocks. On the other hand, their legs are particularly strong so that they are able to resist the heavy waves that crash against them as they feed. The Sally Lightfoot crab’s diet primarily consists of red and green algae that grow on rocks along the coast. Once they see a threatening wave approach, they flatten their bodies against the rock and cling tightly with their strong claws.

Nevertheless, these colorful crabs are opportunistic predators, meaning that they will eat almost anything they come across including barnacles, young sea turtles, other crabs, and young birds, as well as dead fish, broken eggs, and even bird droppings and sea lion placenta. Their claws become very useful for this varied diet, like powerful and sharp spoons- they use them to rip apart the meal and spoon out the goods. This role as beach predators, grazers, and scavengers makes them critical to a healthy beach ecosystem.

In addition to their speed, these agile crabs have a few tricks to escape the claws of hungry hunters. Firstly, the Sally lightfoot crab has a very tough shell to protect its fleshy body that becomes stronger with age. However, because of this, the shell is significantly tenderer when they are young, and so their first shells are dark brown or black to blend in with the beaches and hide from their prey. On the other hand, if the crab feels severely threatened it is able to shed one of its legs (which it can regenerate) or spray water as a defense mechanism to shock the predator. However, the primary purpose of holding water in their shell is to allow them to breathe on land. As they spend a large amount of time on land, they are able to pour water over their gills every once in a while to keep breathing.

Considering that the Sally lightfoot crab has so many predators, one would think they would try to blend in just a little with their surroundings. Sally lightfoot crabs are a shockingly bright red and blue, while some have pink or yellow markings, which stand in stark contrast to the white sands and black rocks. Yet because the crabs have such as strong shell to protect them, instead sexual selection becomes their priority. In fact, as their shell gets tougher as they mature, it also becomes brighter; baby crabs have small red spots on their shells, and every time they molt their shell, the spots become larger until they acquire the typical adult coloring at a mature age. We can confidently say that when Sally lightfoot crabs become adults, they are virtually predator-free.

Breeding and reproduction of the Sally Lightfoot Crab

As it gets older, the sally lightfoot crab acquires its characteristic bright red color. Photo by Mark Rowland via Flickr

Once the crabs mature, they breed year-round, the males breeding more frequently than the females. Females carry the eggs on their stomachs until they are ready to hatch, at which point they release them into the water. The first phase of their life is spent entirely in the ocean where they undergo several molts, each time adding more body segments and appendages. Eventually, the young undergo a metamorphosis into juveniles (the exact number of molts is unknown). As part of their health status, these crabs will molt throughout their life, and when they do it they get rid of their temporarily hard shell, become the highly-prized soft shell crabs (they remain in crevices and cracks of the rocks until the external shell gradually becomes hard), and repeat this process regularly.  The frequency of molting is related to growth, and therefore a healthier Sally lightfoot crab will grow faster and thus will molt more frequently. Just fascinating!

Sometimes, when exploring rocky coastlines, you may be lucky enough to find a recently abandoned shell. These crabs will leave that old shell perfectly intact, to the point you will think it is still alive.

Read our list of Galapagos iconic species, it will help you choose the islands you should visit during your vacation in the Enchanted Isles!

Where to see Sally Lightfoot Crabs

These beautiful crabs can be seen year-round, typically in shallow water and on the majority of rocky shorelines in the Galapagos Archipelago. Best islands to see them: Española, Santiago, Fernandina, Floreana, and San Cristobal.  Apart from the Galapagos, they can be found along the coast of Central America, Mexico, and nearby islands. Will you be able to see these amazing crabs on your Galapagos cruise?