Prey and Predator Share a Peaceful Moment on Rabida Island 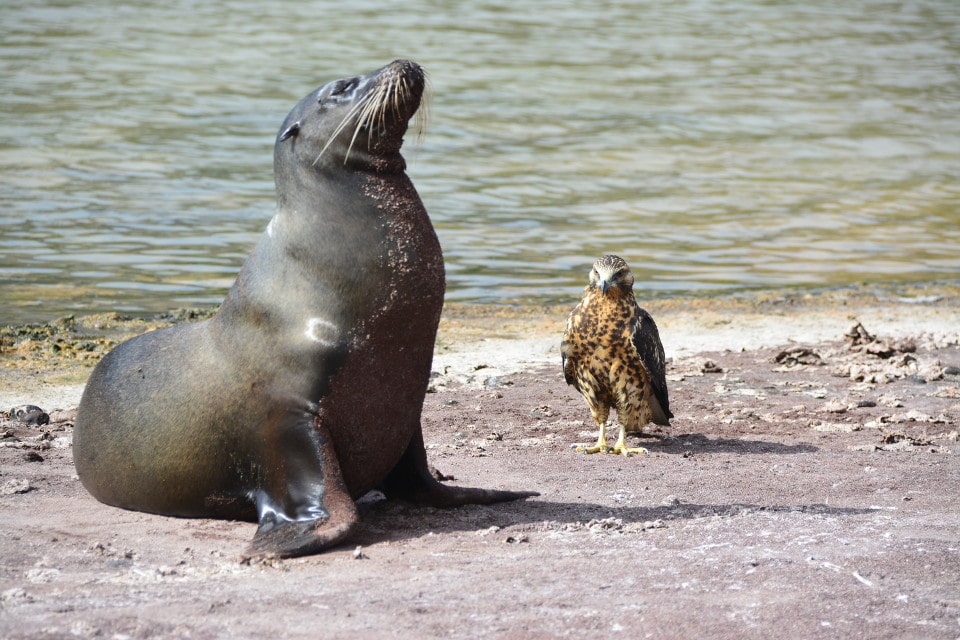 Galapagos is a fast paced, ever-changing world where the landscape can drastically change in a relatively short period of time along with the wildlife that inhabits it. Animals find smart ways to adapt to their new environment in order to survive, and it is always an amazing experience to see it first-hand. In the Galapagos, every day is full of surprises, and our guests aboard the Santa Cruz II had the opportunity to see some amazing wildlife interaction. Few experiences are as enriching as being incredibly close to harmless wildlife as they are in the archipelago, but on this occasion, we even got to see a beautiful scene in which prey and predator shared a peaceful moment on Rabida Island.

When you visit the Galapagos Islands, we can almost guarantee that at some point you will come across one of the most emblematic Big15 species of the archipelago – the Galapagos Sealion. This mammal can be found on most of the Galapagos Islands, and in numerous locations on each of these islands. At times, they will be seen basking under the equatorial sun along the rocky shores. Other times, we will get a glimpse of them fishing in the open sea or swimming alongside dolphins. You will also see them climbing impossibly steep cliffs or just hanging out on a beautiful white-sand beach. In fact, and it might sound like something out of a Disney movie, you will also get the chance to go for a swim with these sweet-looking mammals! They are very curious and they will get extremely close to you to get a better look at what it is exactly that’s swimming in their territory. They might try to catch the bubbles coming out of your snorkel or playfully bite your fin! And don’t get scared, for they are not aggressive. However, make sure you are not the one getting close to them, as Park regulations strictly forbid touching the animals.

The Galapagos hawk is the top predator of the archipelago (and also a member of the Galapagos Big15). This magnificent bird can also be found on many islands. At times, we will be able to observe its nesting spot over by the rocks or flying over the beach. Every now and then, we will see it land on a tree, it will keep a vigilant eye looking for prey while perched on a branch. On certain occasions, guests will be able to see a bunch of them together feasting over their catch, which might happen to be a sea lion cub (much to our own sorrow, but this is nature’s way!). Just like any other animal, young hawks tend to be a lot more curious and less cautious than adults. They might even come a little bit closer to us humans just to have a better look.

Galapagos hawk looking for a prey.

Prey and Predator on Rabida Island

On this occasion on Rabida Island (visited on our Northern Islands Itinerary) we got to see something incredibly unusual. A young Galapagos hawk was actually on land, standing very close to a grown Galapagos sea lion. We had a young, top predator right next to what would have been a potential prey (had it been smaller). The sea lion didn’t seem to mind the hawk’s presence as it knew the bird was not big enough to be a menace. However, the hawk was walking and jumping around the sea lion trying to figure out if it was to become its next meal. The hawk didn’t really behave in a hostile manner, and it stayed there for a very long time, giving all of us enough time to enjoy such a magical moment, and take some amazing photos.

Predator and prey in Galapagos.