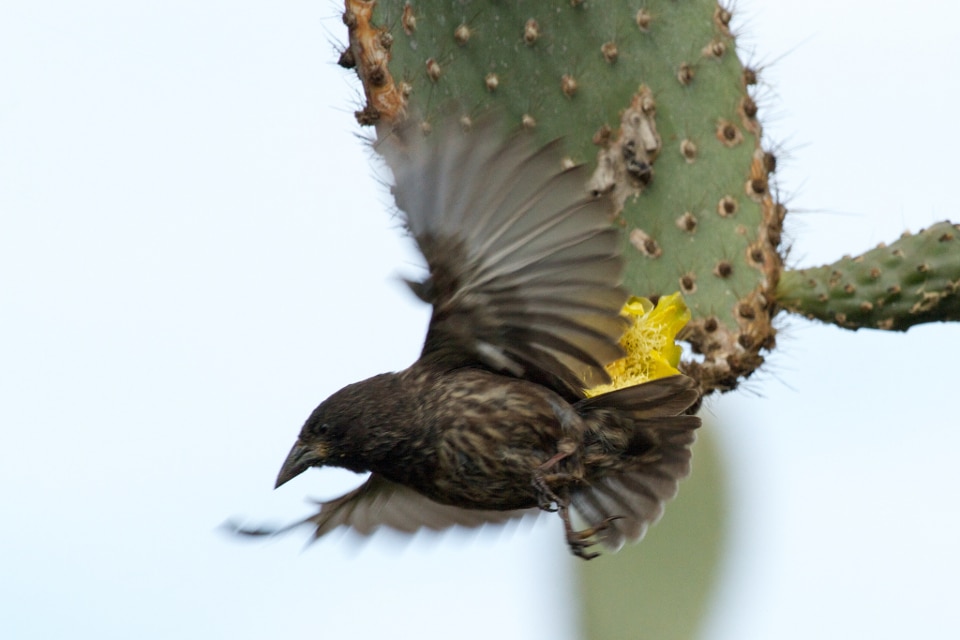 A new species of Galapagos finch has been discovered! And what’s more? The process of speciation has been witnessed in real time, making it one of the first times that scientists have been able to witness such an event directly, out in the field! The news from a recent report that was released in the journal Science, under the title “Rapid hybrid speciation in Darwin’s finches.”

How was the New Species of Galapagos Finch Discovered?

Researchers in the Galapagos managed to follow a particular population of finches that resided on the small island of Daphne Major off the northern coast of Santa Cruz Island, allowing them to watch the process of speciation over the course of several years.

It all began in 1981, when said researchers managed to witness the arrival of a male on Daphne Major that came from a non-native species – the large cactus finch – which then went on to mate with a female that belonged to the local species – the medium ground finch – that led to the production of fertile young.

Finches in Galapagos are renowned for having helped Charles Darwin in the development of his theories regarding natural selection and evolution.

40 years later that, the number of offspring from these two distinct species can still be seen, numbering at about 30 individuals. The rise of this new species of Galapagos finch in such little time raises new questions and realizations, making scientists notice that evolution can actually happen a lot more quickly than was originally thought. This alters our understanding of rapid evolutionary changes in the field of speciation.

Just how different is this New Species of Galapagos finch?

What marks this new species of Galapagos finch as distinct from their cousins throughout the rest of the archipelago is the fact that their habits are different and they can’t interbreed with other populations.

The cactus finch is one of the variations of Darwin’s Finches.

What’s also worth noting is the fact that, in spite of all the inbreeding with this new species of Galapagos finch, there haven’t been any…. For a long time, it was believed that two different species interbreeding would produce infertile offspring. In recent years, however, it has been shown that not just birds but other animals that have experienced speciation are, in fact, able to interbreed and produce even more fertile young! It’s a process that’s scientifically known as hybrid speciation.

Our qualified Naturalist Guides are ready to show you the differences between each species of finches.

Where did this new Galapagos species come from?

It is presumed that the male of the cactus finch breed of species flew in 104 kilometers (65 miles) from its home island of Española in Galapagos (viewable on our Eastern Islands Galapagos itinerary). How a bird this small managed to make it all the way to Daphne Major is still baffling to researchers, but they said it would be very unlikely that it make a return trip home.

Medium-ground finch is one of the endemic Darwin’s finches.

This new species of Galapagos finch has found itself well adapted to their environment (contrary to what typically happens with cross-species mating). Their larger size, in fact, has allowed them to take advantage of new and unexploited food on Daphne Major. Colloquially, the researchers are referring to them as the “Big Bird population.”

Another surprise is the fact that researchers originally though that the new species would mate with the local species on the island, but in fact have remained loyal to their new species of Galapagos finch, which confirms that they are a closed breeding group.

Read our list of Galapagos iconic species, it will help you choose the islands you should visit during your vacation in the Enchanted Isles!

The cactus finch feeds mainly on seeds of Opuntia cacti.