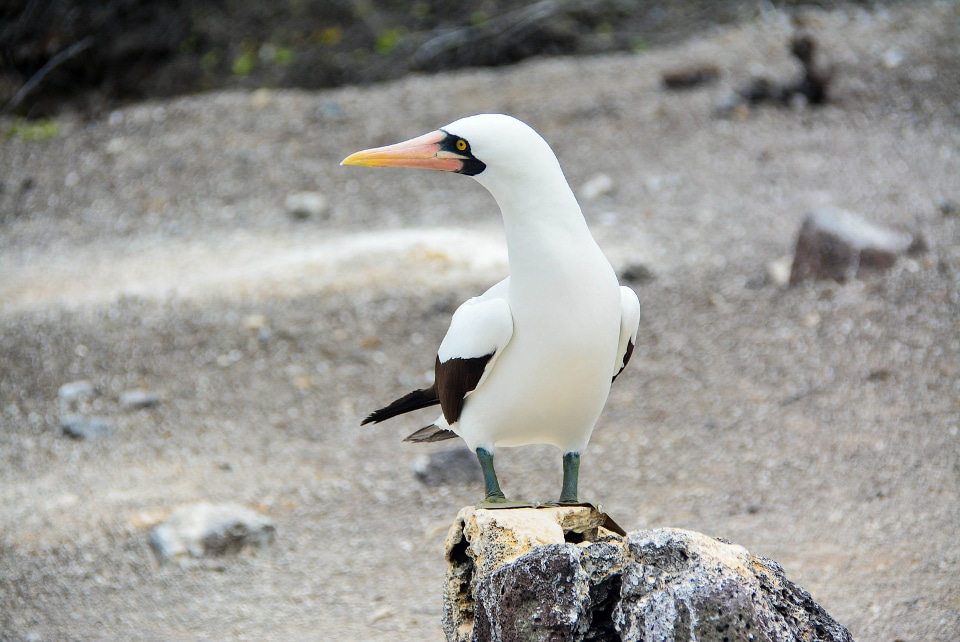 Galapagos wildlife’s indifference to human presence is pretty novel. Swimming with sea turtles and sea lions as if they thought you were part of their submarine world is an experience you will not get to have anywhere else. While traveling to the archipelago’s most beautiful islands aboard the most amazing Galapagos cruise (which is the only way to see some of the furthest islands and rarest endemic species) you will have opportunities like these every day. Learning about the Galapagos animal’s behaviors and evolution while watching them in their natural habitat will be the biology class you always wanted. Some of these behaviors seem almost human-like, yet others follow more instinctive evolutionary patterns, such as the Nazca booby’s (which happens to be a Big15 species). Read on to learn more about Nazca boobies during nesting season on Genovesa Island. 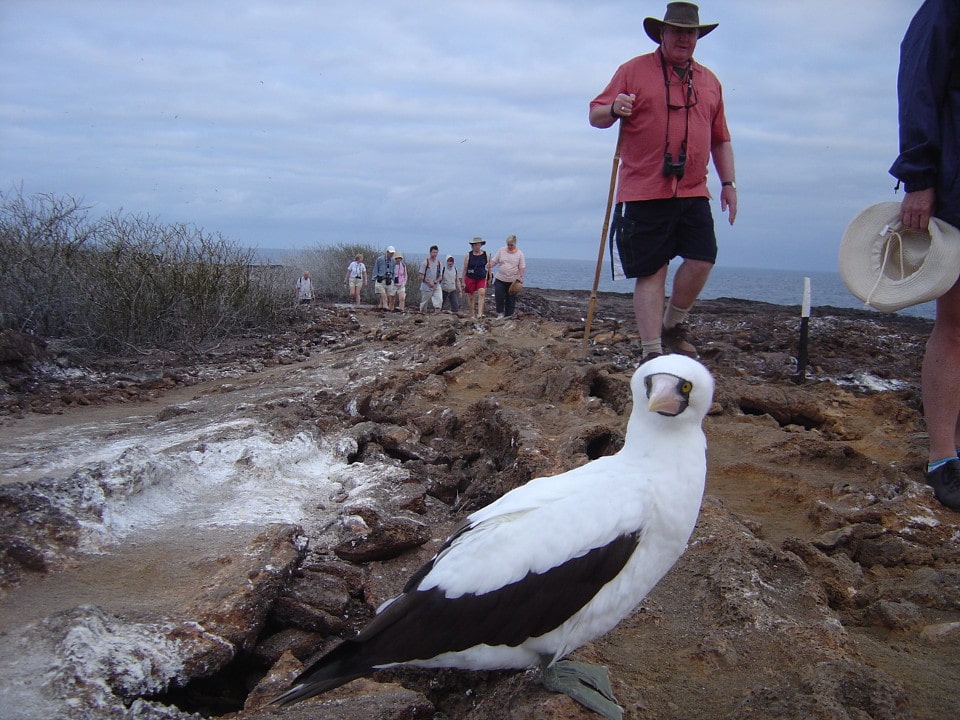 Even though it’s a close relative of the famous blue-footed booby and its red-footed cousin, Nazca boobies show particular physical characteristics and behaviors of their own that separate them from the latter two. With their black and masked eyes, pinkish-orange pointy beak and snow-white feathers, they appear both graceful and elegant. And like all other Galapagos animals, they can be quite photogenic. However, they are much more territorial and vicious when it comes to the term “survival of the fittest.” Observe these creatures throughout their nesting and hatching season, and watch Darwin’s theory of evolution come to life right before your eyes!

Nazca boobies are found on Genovesa, Española and Fernandina. Unlike blue-footed boobies, who look for open and flat spaces inland to create their “nest” or guano ring, Nazca boobies look for spaces up in cliffs and crevasses. Space in these areas is limited, which is why Nazca boobies become fierce competitors when it comes to their territory, often pecking aggressively at other Nazca boobies who might get too close to their nest. However, the Nazca booby colony living on Genovesa Island – which can be visited on our Northern Itinerary – has exhibited a rather unusual bit of behavior. Due to there being a small blue-footed booby population on this island, Nazca boobies have taken over some of the niches that would normally be occupied by their cousins. Because there is more area and less competition, some Nazca boobies have even shown behavior similar to the blue-footed booby. They are not really imitating their blue cousins, rather, they have found an available ecological niche to nest inland. 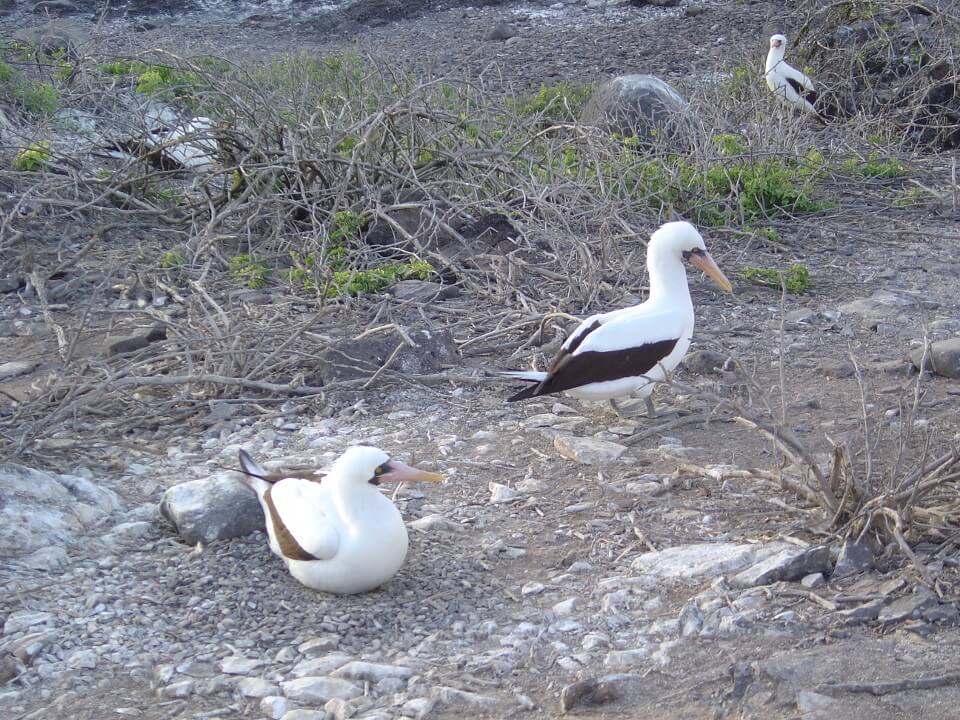 When a bird lays a single egg, it usually means that the egg has a 50% chance of surviving. For this reason, female Nazca boobies lay two eggs spread out by five-day. This way, if anything were to happen to the first egg, the second would take its place. If both eggs hatch, the first egg always hatches first and the second one hatches a little later. For this reason, the second one will always be smaller and weaker in comparison to its older sibling. They both grow up together until the first one has survived its critical period – the first 15 days after being born. As soon as this period is over, the first one – larger and stronger – will start pushing the smaller one out of the guano ring. Even though their blue-footed cousins don’t show this type of behavior, the moment the hatchling leaves the guano ring it becomes instant prey for predators (for both species). The Nazca’s siblicide instinct isn’t uncommon and it’s a regular process seen in other marine and coastal birds. When viewed from an anthropomorphic perspective, its sounds rather cruel that a sibling should be pushed away and left to die with the parents doing nothing about it. However, as Darwin’s theory confirms, this instinct allows for only the strongest and most suited individuals to survive, thus improving the population’s gene pool and ensuring its survival throughout time. 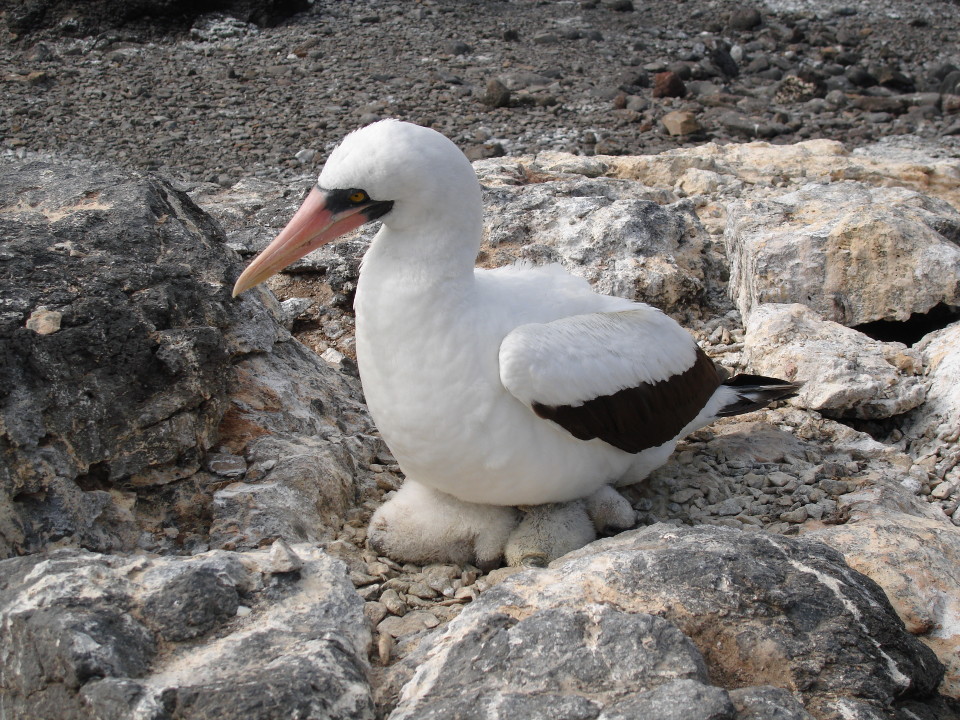