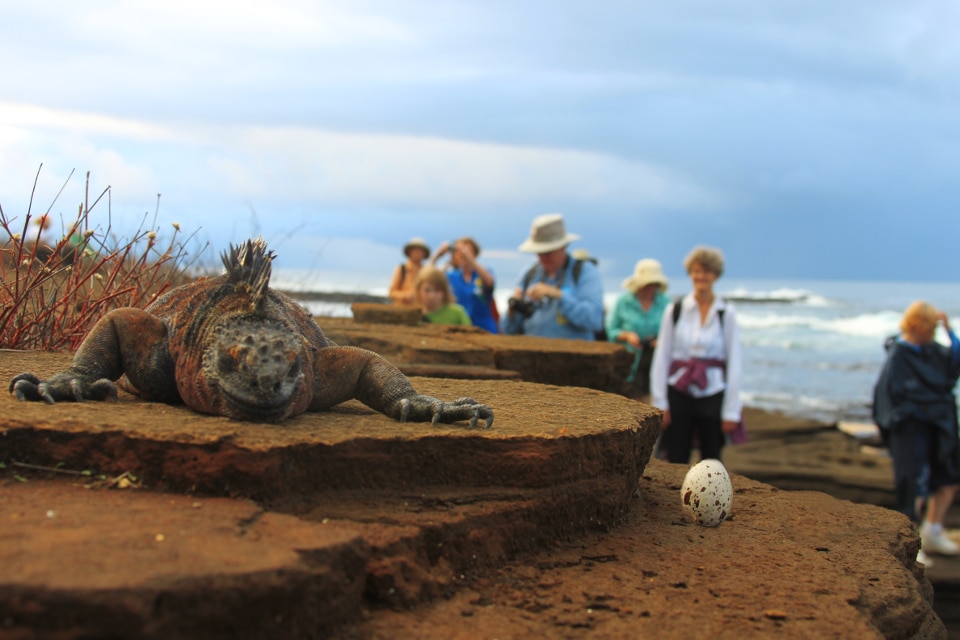 Dark and captivating in their abilities, marine iguanas truly are a sight to behold in the Galapagos. Marine iguanas hatching is also another spectacle to watch, as it serves as a reminder of the continuation of this remarkable species and just how far it has come. In this blog, we take a quick look at one of the Galapagos wildlife most interesting species and then examine the brief but momentous event that involves marine iguanas hatching – something that’s happening this month of May!

The Arrival of Adaptability

It is believed that they floated out to the Galapagos from the South American continent aboard rafts of vegetation. But marine iguanas are even more unique due to the behavior that they exhibit around their diet. This diet consists almost exclusively of inter- and subtidal algae. As a result, marine iguanas don’t hesitate to get their feet wet.

In response to the harsh marine environment that keeps them from grabbing as many algae as possible, these iguanas have evolved blunt noses (to give their mouths easier access to the algae that grows on rocks) and flattened tails that help them swim. Their limbs are also reinforced with more muscle and bigger claws that allow them to cling tenaciously to underwater rocks when the tide gets rough.

The cold waters are unforgiving too, and their dark color actually serves as a direct response to these low temperatures. Their dark scales allow them to rapidly absorb heat from the sun – a trait which also lowers their period of recovery after emerging from the relatively cold waters of the Galapagos.

An Exclusive Event in the Galapagos: Marine Iguanas Hatching!

Within the lifespan of a marine iguana, it takes a couple of years for this grand event to finally occur. Females reach sexual maturity sooner than males, typically between the ages of 3-5 years. Males reach maturity anywhere between 6-8 years.

Females pick the mate, and it’s a courting process where size plays a huge role – the bigger the male iguana, the more likely they are to get picked. It’s only until one month after copulation that females begin nesting (January to April), typically laying anywhere between one and six eggs. The eggs will then incubate 30-80 cm (12-31 in) under the sand for the next three months.

Bringing it back to the concept of size for a minute: It is speculated that females picking their mate based on size has a lot to do with creating bigger hatchlings – the bigger the hatchling, the higher their rate of survival once they emerge.

Hatchlings will weigh anywhere between 40 and 70 grams and be about 10 cm (4 in) in length. These young iguanas won’t get their feet wet until they’re two years old, at which point they’ll be big enough to swim. Nevertheless, when the baby marine iguanas do emerge from their nest, they don’t hesitate to use their feet to run as far away and as quickly as possible in search of cover – an instinct that helps them avoid immediate predation. Often times, these young marine iguanas will run away so quickly that the front half of their little bodies will lift up and they’ll end up becoming bipedal for a brief moment!

Case in point: The following, hugely popular video by the BBC

Marine iguanas are ubiquitous in the archipelago, and will definitely be seen on any one of our Galapagos tours.