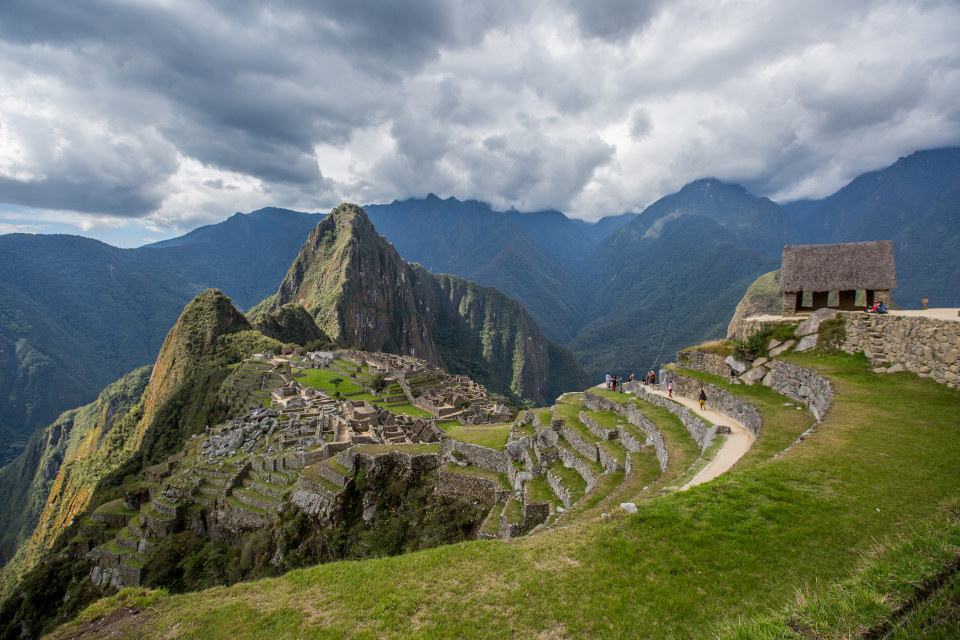 Many of us know Machu Picchu to be spectacular ancient ruins among the jagged peaks of South America, brought to mind every now and then in the profile picture of a friend standing next to a llama; yet, sitting 2,430 m. above sea level, listening to the gush of ancient water fountains amid almost perfectly maintained buildings and community structures, and surrounded by rocky peaks and valleys of lush tropical forest, there are few other places in the world where the legend of the past is so vividly present.

Perhaps one of the greatest wonders of this city is, in fact, what remains unknown.

Lost Cities of the Inca by National Geographic video

At the time of Christopher Columbus’ arrival to the South American continent, the Inca Empire stretched 4,300 miles, covering most of Peru, Bolivia, Ecuador, northern Chile and Northwest Argentina – the longitudinal expanse of the Roman Empire. The Incas developed one of the most sophisticated empires of the pre-industrial world. Their orderly sociopolitical management system, highly effective taxation, and advanced agricultural and irrigation methods allowed for an extremely successful state and rapid expansion.

The capital of the Inca Empire was located in the city of Cusco, the zenith of its political and economic structure. Through its conquests, the Inca Civilization united much of the indigenous culture of South America, and as such, their capital was the culmination of 3,000 years of indigenous cultural development in the southern Andes. Remarkably, its spatial layout, along with several sectors and individual buildings remaining from the Inca capital can still be observed in Cusco today.

The Incas themselves had no written language, and so much of what we know is based on documents on the Spanish invasion and occupation. Recent research has discerned the Sacred Valley to be the heartland of the Inca Empire, consisting of 100 square kilometers of ancient villages, archaeological remains and natural wealth. In recent years, it has become a hotspot for tourists looking to gain a more holistic understanding of the Inca Empire. The region is brimming with artifacts and ruins simply lying in wait for intrepid explorers. Many of the ruins have spiritual significance, such as the breathtaking Temple of the Condor, which was carved from a natural rock formation into the shape of a condor with its wings outstretched. The Incas believed that the condor represented spirit and higher levels of consciousness. However, research has determined that the archeological remains found in the Sacred Valley served for a wide variety purposes, from tombs to food storage facilities and centers for agricultural research.

Despite their knowledge of the Sacred Valley, not all of the Inca riches were revealed to the Spaniards. Rare treasures were concealed in the surrounding mountains, hidden from foreign hands and Spanish swords. It was not until the 20th century that light was shed on the rumors of these sites, when Yale archaeologist Hiram Bingham went searching for the “lost city” of the Incas and found what is arguably one of the most important archaeological sites of the Inca Empire.

How to visit Machu Picchu?

We have a special Machu Picchu and Galapagos package for you

Machu Picchu, the other lost city

Machu Picchu was ceremoniously revealed to the western world by Hiram Bingham, who had been guided to it by three indigenous men. It has since been named a UNESCO World Heritage Site (1983) and one of the New Seven Natural Wonders of the World (2007). Built in the 5th century, it offers tangible evidence of the legacy of the Inca Empire at the peak of its power and success. The city´s layout demonstrates the masterful social, productive, and administrative organization of the Incas, and the city itself offers evidence of being a religious, ceremonial, astronomical and agricultural center.

Layout of the City

Machu Picchu is intricately connected to nature, reflecting the deep reverence and connection the Incas had with the earth. The city was constructed not only on the land, but with the land, resulting in an aesthetic harmony between the city and nature. The buildings and community structures were beautifully built into the side of the hill based on their different functions, taking advantage of the nature of the land itself. A clear example of this is the more than 700 agricultural terraces and the advanced irrigation system, which make use of the natural slopes and are engineered to limit erosion, conserve water and boost optimal agricultural conditions. Indeed, the incredible landscaping projects often used by the Incas so amazed the Spanish conquistadors that they named the Andes Mountains after their Quechua name, andenes. The city’s harmony is further enriched by the abundant natural life of the region, making the panoramic views truly remarkable.

The city was also very well organized, with narrow lanes and paths that connected its various segments.  Machu Picchu is divided into two sectors with a wall and a large square separating the upper residential sector from the lower farming sector. An extensive irrigation system connects the two sectors, and reports suggest that it carried water from a holy spring to each of the houses in the city. Archaeologists theorize that the city was further divided into three districts: the Sacred district, where many of the archeological treasures can be found, such as the Intihuatana and Temple of the Sun; the Popular District; and the District of the Priests and Nobility, easily recognizable by reddish walls and more elegant buildings.

The buildings themselves are in remarkably good conditions, mostly down to the brilliant construction methods used. Only a select few were built using mortar. Instead, the stone blocks were fitted together so well that after centuries, not even the blade of a knife can be wedged between them. It is possible that the prevalence of this technique, called ashlar, is due to the highly seismic nature of the land. This method allows for the stones to move slightly and then resettle without causing any structural damage.

Perhaps even more astonishing is that Machu Picchu was built without the aid of the wheel, iron or steel, leaving experts uncertain as to how they moved the building blocks, some of which weigh up to 50 tons. Inca artifacts demonstrate that the Inca did indeed know about the concept of the wheel, but it appears a lack of strong animals, and the steep terrain and dense vegetation made its use impractical.

The True Purpose of Machu Picchu

Prior to 1911, the year it was discovered, Machu Picchu was perhaps the Inca’s best-kept secret, as there is absolutely no written evidence of its existence. Indeed, it was discovered unintentionally; Hiram Bingham was originally looking for Vilcabamba, the “Lost City” of the Incas, a refuge for the last Inca rulers. For 50 years he believed that he had found it until he was proved otherwise when Gene Savoy discovered the true “lost city” in 1964. Nevertheless, after a century of research and with an entire city at their disposable, scientists are still unable to agree on three principle questions: who, what, and why? However, there are three main theories as to what and whom Machu Picchu was built for.

One theory is that Machu Picchu acted as a military stronghold. The city is strategically located on a steep hill, bordered on three sides by precipitous canyon walls, and it is completely invisible from the valley below. Additionally, Machu Picchu is entirely self-sustainable, allowing for its inhabitants to survive a long siege. All of their food was produced from the terraces and surrounding hills, and the hill is supplied with water from fresh springs and fountains.

On the other hand, the city also presents evidence of having been a ceremonial site. Many of its buildings appear to bear religious significance and the extreme isolation of the mountain also suggests a spiritual importance. Additionally, the Urubamba River, which nearly encircles Machu Picchu, was known as Vilcamayo by the Inca, meaning Sacred River. Dr. John Reinhard gathered information from several historical, archaeological and ethnographical sources to support the idea that “Machu Picchu formed a cosmological, hydrological and sacred geographical center for a vast region.” It is possible that Machu Picchu could have been a temple devoted to the sun god, Inti.

More recent findings suggest that Machu Picchu served as a royal retreat for the emperor Pachacuti and his royal court. This latest theory is primarily based on a document created by the Spanish conquistadors in the 16th century. This mentions a royal estate called Picchu, built approximately the same time as Machu Picchu. However, this is further supported by the shape of the buildings, which were built in the style that Emperor Pachacuti established as the mark of Inca estates. Additionally, archaeologists have identified several buildings as having been the emperor’s homes. There are also open plazas that could have served for rituals, feasts, dancing and sport competitions. This theory could also explain the small size of the city relative to Inca standards. The mere 5 sq. ml. could have held approximately 500 to 750 people.

What truly confounds archaeologists is the variety of skeletons and artifacts that have been found in Machu Picchu. Over one hundred skeletons have been unearthed, revealing evidence that they originate from all over South America. For example, several types of head modeling have been discovered – a tradition that was practiced by coastal and some highlands tribes. Additionally, a variety of ceramics have been found, their styles originating from numerous regions in South America, even as far as Lake Titicaca. No matter the true purpose of the city, it is possible that these people came from several areas of the empire, potentially as the emperor’s servants.

Machu Picchu is an archaeological wonder and a veritable work of art, hidden amongst the breathtakingly beautiful tropical mountains. However, it is unlikely that we will ever truly be able to understand the reason why Machu Picchu was built. It is possible it was both a religious sanctuary and retreat for the emperor, as spirituality was intricately woven into the lives of the Inca people. Whatever it was, it is well deserving of its status and a site we must protect at all cost.


Start your adventure in Peru and Ecuador today!