The Astonishing Hybrid Iguana in Galapagos 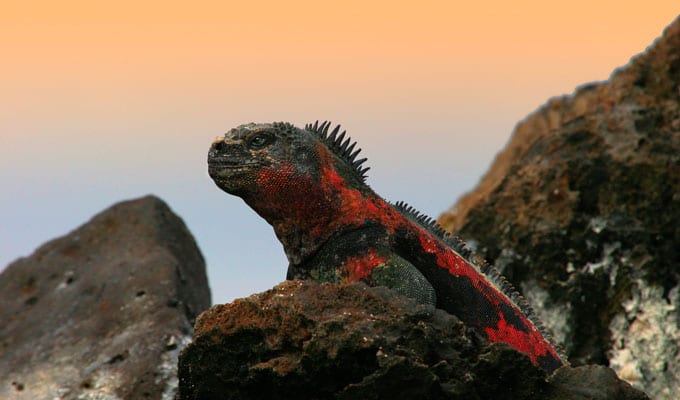 Although the fame of the Galapagos Islands is heavily linked to the term ‘evolution,’ it is not merely the concept of evolution that makes them so unique- evolution happens everywhere, at all times, in all forms. Instead, it is the clarity with which this process occurs and the extreme forms it takes on; so efficient that evident changes can be observed within a single population over just a few generations. But even in this ‘living laboratory of evolution“, it continues to surprise us. Only recently, an entirely new iguana was discovered –  the Hybrid iguana in Galapagos – it has been hiding in plain sight in the archipelago, possibly for decades, and it has resulted from quite peculiar circumstances.

There are two types of iguana in the Galapagos Islands, which are separated by what could be as many as 10.5 million years of evolution: the marine iguana and the terrestrial iguanas. Nevertheless, it was recently proven that these two completely distinct species are interbreeding on the minute island of Plaza Sur (measuring one-tenth of a square mile), resulting in an extremely unique and unusual lizard.

The first ‘strange’ iguana was sited in 1977 by biology professor Howard Snell who was volunteering in a land iguana conservation project through the US Peace Corps. He was puzzled by the unusual qualities the iguana displayed and found he was unable to categorize it as either a marine or land iguana, explaining it as “very intermediate in a lot of characteristics between land and marine iguanas.” During his work, he observed several of these mixed iguanas and eventually came to realize that this ‘strange’ iguana was not abnormal, but could very well be the extraordinary result of interbreeding between marine and land iguanas. However, it was not until 20 years later, when the existence of the hybrid was confirmed that he knew for certain what he had seen. During the 23 years he worked on this project, he saw only 17 of these animals.

Snell is one of the very few individuals to have ever seen these creatures and, in fact, there are many guides who have been working in the Galapagos Islands for years and have never seen one; only 20 have ever been sited. In 2013, Alizon Llerena from the Charles Darwin Foundation performed a census of the iguanas on Plaza Sur and she found only four hybrids. It is likely these hybrids are sterile and thus unable to reproduce and pass on their unusual traits, which is why they’re so rare. 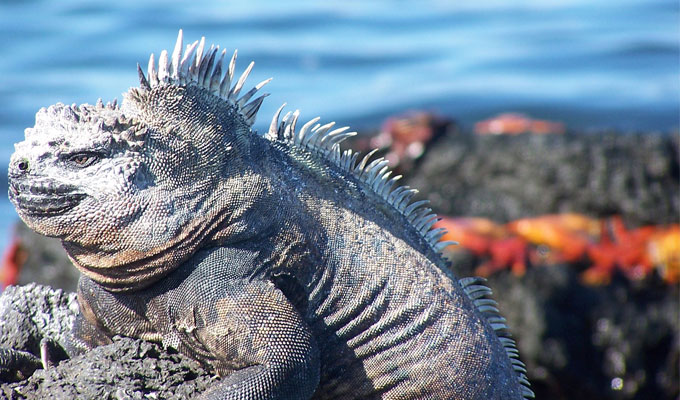 The marine iguana, in itself a remarkable example of natural selection and evolution, is the only sea-faring lizard in the world and feeds almost exclusively on algae that grow on rocks on the ocean floor. Their flat faces help them to grab the algae with their teeth, while their long sharp claws allow them to cling onto the rocks despite powerful waves that try to batter them around. On the other hand, land iguanas, as their name suggests, are entirely land-dwelling and primarily consume prickly pear cacti. Unlike the marine iguana, the land iguana has a pointed face, which protects its eyes from the cactus spikes as it grabs at the plant.

The marine-land iguana hybrid is literally a mash-up of the two species and has acquired unique behavior in accordance with its physical characteristics. Visitors that are lucky enough to see a hybrid can recognize it thanks to its black coloring and the long yellow stripes that decorate its neck and torso. The hybrid iguana in Galapagos is land-dwelling; however, it displays several characteristics of the marine iguana including its long claws and flat, rudder-like tail, and is thus believed to be able to survive in both marine and terrestrial environments. Interestingly, the marine traits of this land-dwelling animal seem to give it a certain advantage over the land iguana. For example, the hybrid iguana in Galapagos has even been seen consuming seaweed. Even more interesting, it has been seen using its strong claws to climb trees and cacti, whereas its land-dwelling relative must wait for the fruit to fall. This behavior was previously unknown among Galapagos iguanas. 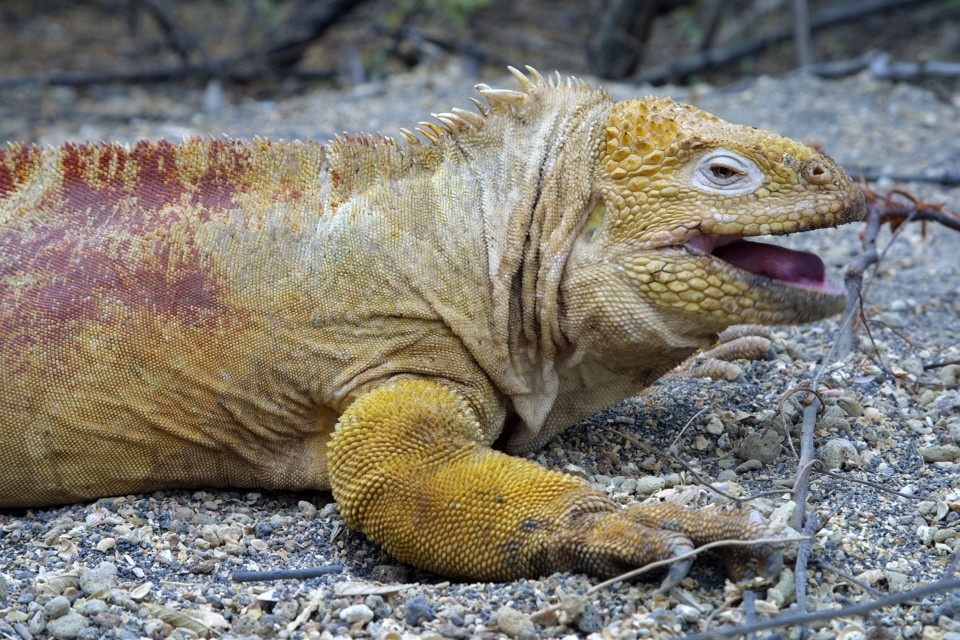 There are different species of land iguana in the Galapagos

Galapagos land and marine iguanas are known to have separate breeding periods, but on Plaza Sur the seasons of each species overlap just slightly, so that late-coming marine iguanas may be forced to mate with marine iguanas that have only just begun to arrive at the island. This is further reinforced by the island’s small size, where the two species must share the same space. Interestingly enough, the hybrids only occur between male marine iguanas and female land iguanas.

Hybridization is typically considered negative as it reduces the gene pool of a species and thus its biodiversity, increasing the risk of extinction; however, the discovery of the hybrid iguana in Galapagos has put experts in a confusing position. The hybrid iguana in Galapagos is the result of a perfectly natural process that was not provoked by human meddling, and it has resulted in a new and extremely rare species. The question has now become, do we eradicate the potential threat, protect the rare species, or let nature do as it does? The potential for the hybrid to impact the evolution of Galapagos iguanas seems unlikely, but it cannot be entirely ruled out.