Giant Tortoises in the Highlands of Santa Cruz Never Stop Surprising Us! 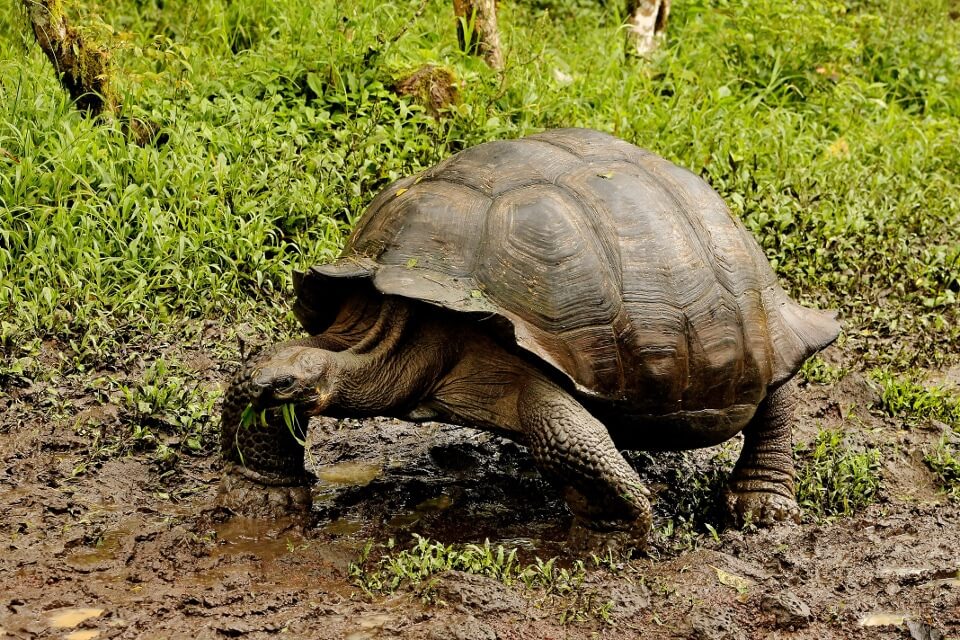 Santa Cruz is the second-largest island in Galapagos and, coincidentally, it hosts the second largest population of the second-largest dome-shaped giant tortoise. This is just one of the reasons why seeing giant tortoises in the highlands of Santa Cruz tends to be such a special event. It’s also another reason why it’s a member of our BIG15 group of iconic species in Galapagos. On a more human-note, the Island of Santa Cruz is the home of the largest number of inhabitants in the archipelago and it is where I, Desirée, personally live. It is a place I am very fond of, and in this blog, I’ll fill you in on one of the giant reasons why.

The Santa Cruz II Galapagos cruise was anchored over on the southern coast of Santa Cruz Island, and it was from here that we could see the outline of the town as well as the misty highlands where tortoises roam. After a dry landing at the municipal pier, we took a bus and traveled for around 40-minutes into the highlands to visit a private tortoise reserve. A winding road makes its way through changing vegetation – from green mangroves to leafless Palo Santo trees – and the lush greenery of the farming areas. Dotting the sides of the road, like wet marbles shining under the wavering sunlight, were tortoises! So many giant tortoises in the highlands of Santa Cruz! It was almost difficult to keep track of just how many there were!

Galapagos giant tortoise on the road.

Tortoises Are Fond of Cattle Ranches

Giant tortoises have traditionally been known to forage on the western slopes of the island, which is typically wetter and more densely vegetated. Humans followed a similar pattern when they settled in Santa Cruz, choosing the tortoises’ natural areas to do farming and cattle ranching. The Galapagos National Park, however, came in not long after and set aside 97% of the land surface and established it as a protected area, leaving 3% for settlers to carry on with their lives and daily activities.

Slow yet persistent, there was no fence stopping their march into their original feeding grounds.

But tortoises ignored this human decree and continued migrating annually to the wet highlands in order to feed on grass – right there on the very properties that were set aside for the colonists! So, on Santa Cruz Island, if you want to see giant tortoises, you must visit a cattle ranch! Tortoises like it better there, especially during this time of year. In the end, cattle ranchers lost their territorial battle yet realized tortoises brought no harm to their economy, in fact, they actually improved it!

Guests hanging out at El Manzanillo Giant Tortoise Reserve (and Ranch, for the humans!)

Coming Back from the Brink of Extinction

We saw plenty of these ancient and relict reptiles which, not all that long ago, were almost gone due to overhunting and damage caused by introduced animals.  Had it not been for the budding Galapagos National Park service and the Charles Darwin Research Station (the operative branch of the Charles Darwin Foundation for the Galapagos Islands, a pioneer in conservation biology research in Ecuador and around the world) we could not have gotten the chance to see as many as we did on this special day.

Built-in the 1960s, the Darwin Station started off with breeding and rearing in captivity programs for giant tortoises. It has since accumulated a long series of achievements, among which the highlight is to have repatriated over 4,000 giant tortoises back into their original habitats.

Once back on board the Santa Cruz II, we all felt tired but happy, even a little bit nostalgic about what we had just experienced, for we became acutely aware that our wonderful trip throughout the Galapagos Islands was coming to its end – but with a myriad of stories to tell and experiences to remember fondly.