A Galapagos WOW Moment: The Birth of a Sea Lion on Santiago Island 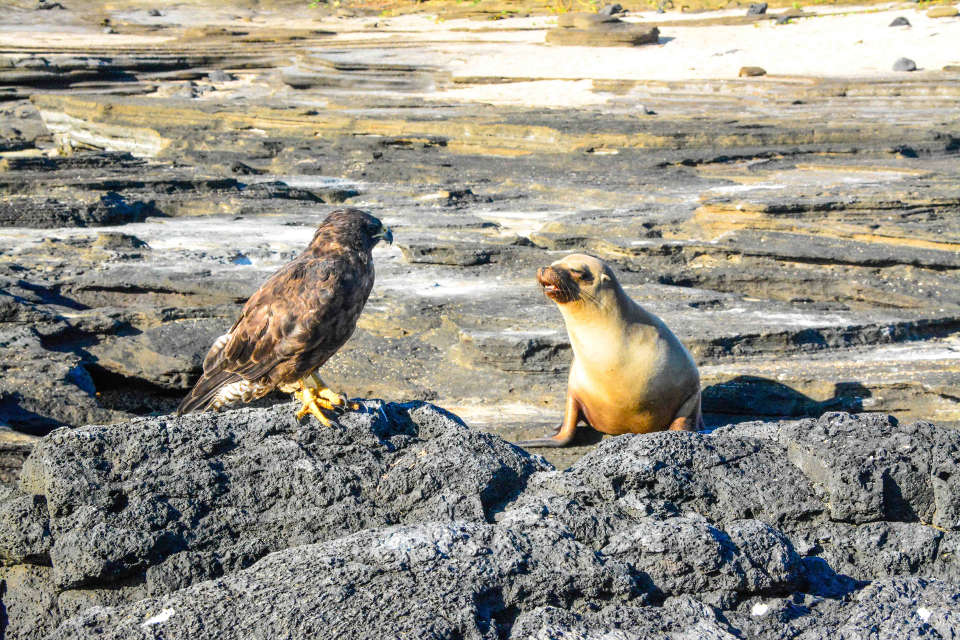 The Galapagos really is a magical natural paradise. Every once in a while, if you happen to be super lucky, it has amazing things up its sleeves that await to fascinate anyone that chooses to visit these beautiful Islands! We’ve seen it before and we just saw it again recently: the birth of a sea lion pup in Galapagos!

On this magnificent day, the Santa Cruz II happened to be anchored over at Puerto Egas visitor site on Santiago Island aboard. The first activity at this visitor site was snorkeling, and all of our guests and guides had a great time checking out the underwater world of Galapagos. We had marine turtles swimming around us as well as some playful sea lions that came around swimming and delighted our guests with their curious demeanor. Plenty of fish surrounded all of us. Following this particular activity was an afternoon hike – a medium-difficult activity that consists of a walk across easy trails and some uneven ground that’s covered with lava rocks.

For this particular activity, I happened to be a part of the 3rd excursion group (remember: Galapagos National Park rules dictate that there must be at least one Naturalist Guide per maximum of 16 guests). While the first two groups decided to take a left upon reaching the fork in the trail, my group went right. Despite the slightly harder difficulty level of this trail, the reward we got was awesome. About halfway through the walk, we came across a sea lion that was acting rather odd. We were the first group to get there and there were two or three more groups directly behind us. Nevertheless, our Naturalist Guide decided to stay with the sea lion as it was clear that there was something special happening. Our patience was rewarded when, after hanging out there for around 20 minutes, we actually managed to witness a fantastic event! Turns out that this particular sea lion that was behaving rather “oddly” happened to be a proud mother sea lion and we were fortunate enough to see the birth of her brand new sea lion pup!

If you are lucky you will see the birth of a sea lion during your visit to Galapagos.

Galapagos hawks can be seen throughout our itineraries aboard Santa Cruz II expedition vessel.

A Galapagos hawk happened to be standing around when the pregnant sea lion began giving birth, adding a certain level of suspense to the whole scene. Was the hawk simply being curious or was it hungry? We were about to find out. We watched intently as the mother sea lion gave birth to her pup, making for quite a bloody moment – more blood than I could have imagined, really! After her baby emerged, the mother instinctively started to clean it up and, in a matter of seconds, she managed to remove the placenta from the baby’s head. It was at that moment that the new baby started to breathe and began moving around. It was amazing just how quickly the newborn sea lion was able to get up on its legs and also kind of somewhat of a shock with just rough the mother had to be with her newborn. But within a matter of minutes, they were already close together and bonding. I was also surprised by how well behaved and respectful the kids of the group were while we witnessed this incredible moment – none of them yelled or made any sudden movement. In fact, no one was talking or moving during the entire scene. We were all just so flabbergasted by having been lucky enough to watch this spectacular miracle of life! Even the hawk was too because it never made a move, it simply flew away by the end of the whole thing! We got to see two members of our Galapagos BIG15 list of iconic species!