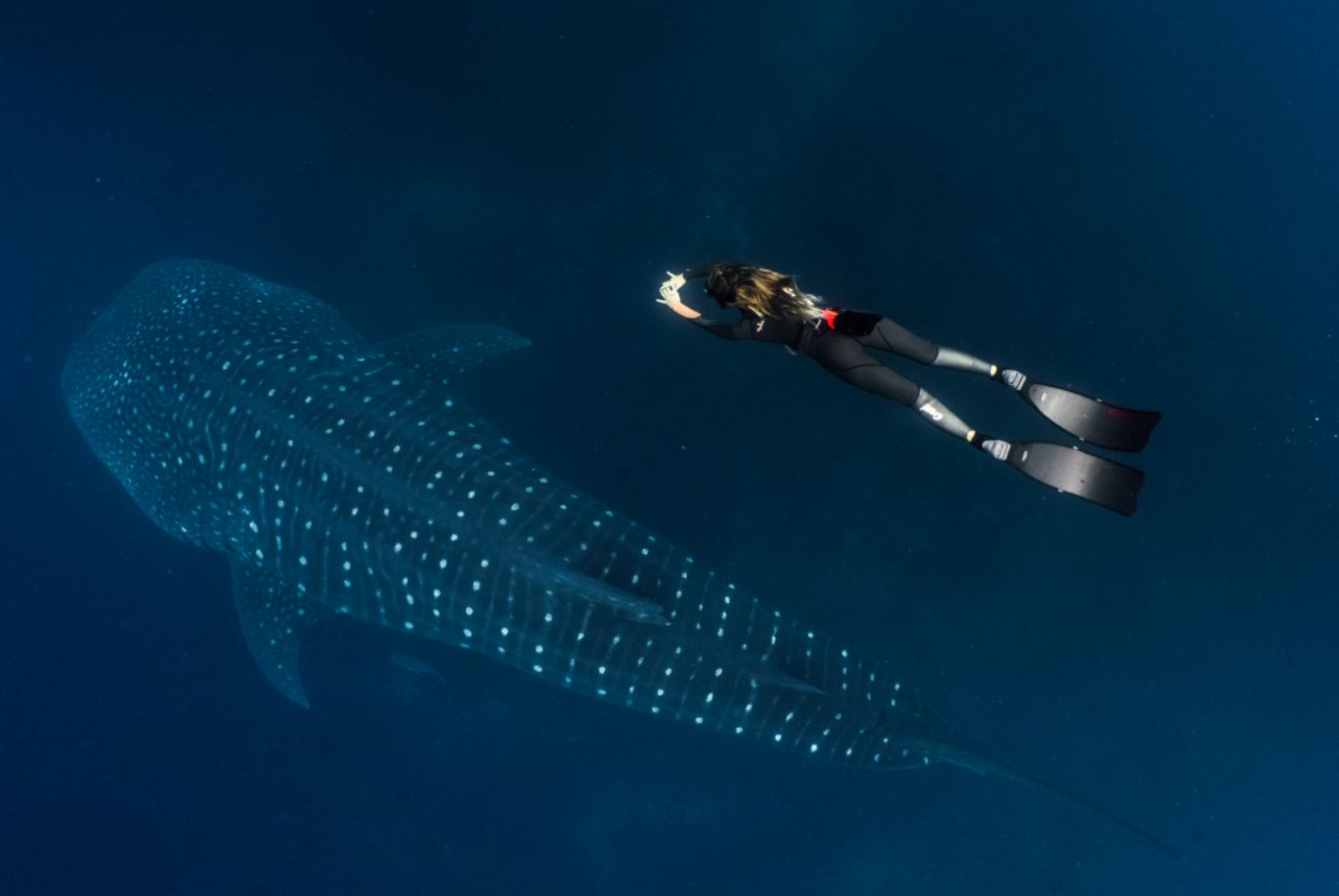 Stories of gigantic beasts such as the horrific megalodon shark and 5-story-tall dinosaurs seem to be a part of ancient history, long replaced by the reign of mankind. However, the archipelago is a land out of the ordinary that is renowned for the strange and unusual creatures it supports, the Galapagos whale shark is no exception. The whale shark is the largest fish in the ocean: it can grow up to a massive 20 meters long (possibly more) and is thought to weigh more than 30 metric tons. Despite its incredible size, the whale shark is largely hidden to the scientific world and very little is known about it. The Galapagos Conservation Trust, Charles Darwin Foundation, the Galapagos National Park and other organizations are currently supporting the groundbreaking Galapagos Whale Shark Project with the aim of enhancing our understanding of the role that the Galapagos Marine Reserve has in the whale shark migratory pattern and also of their migration pattern in general, to discover crucial insights into their life and work towards their conservation. Through this research, the project aims to develop effective management strategies for whale sharks in the Marine Reserve and to discover crucial information such as where they breed, give birth and which waters they inhabit during the first few years of their life.

What is a Galapagos whale shark?

These enormous Galapagos whale sharks are actually extremely gentle giants that often swim among enormous schools of Galapagos fish without eating a single one. These massive creatures are almost entirely supported by plankton, small organisms that drift with the current and also one of the primary elements that form the base of the aquatic food chain. Whale sharks may be found in all tropical and warm waters, with the exception of the Mediterranean. Unfortunately, the IUCN Red List announced that the whale shark could soon be listed as endangered rather than as vulnerable, meaning this unique species is in severe danger.

Apart from their immense size, these sharks can be recognized by their dark gray skin (which is up to 4 inches thick) and light yellow markings, which are unique to each individual, just as zebras can be identified by their stripes. Furthermore, unlike most sharks whose mouths are located at the bottom part of their head, the mouth of a whale shark is located at the front of its head, as if it were a great slit cut into the end of its wide, flat head. These sharks are also filter feeders, consuming huge quantities of plankton through their gills as they swim.

The project is focused in the archipelago primarily because the Galapagos whale shark inhabits waters almost year round (around Wolf and Darwin islands). The majority of Galapagos whale shark merely pass through the islands during their migratory journey, but a significant percentage actually stay around the archipelago and, due to the high number of plankton in the waters around the Galapagos, there is almost always at least one whale shark feeding in these waters. On the other hand, the Galapagos Marine Reserve appears to be particularly important for these sharks because approximately 90% of whale sharks in the reserve appear to be pregnant females, and heavily pregnant. Studying these sharks could provide important knowledge on the breeding ecology of whale sharks.

Unlike whales, the whale shark is actually a fish, not a mammal. Photo by Anthony Patterson via Flickr

In 2011, the project was able to tag 24 whale sharks in order to track them via satellites, recording the sharks´ positions every time they surfaced. The team returned to the islands in 2014 and 2015 to tag an additional 23 sharks and use photo identification methods to collect further data. This enabled the team to identify a general pattern in which the sharks move. None of the sharks that were tagged stayed in the Galapagos Marine Reserve for more than a few days; however, their repeated presence in the archipelago provides strong evidence that the reserve marks an important location within their migratory pattern, particularly for pregnant females. This year the team is continuing to tag and identify more sharks that pass through the reserve, even taking tissue samples. The information the team is gathering regarding the whale shark’s migratory pattern is essential to identifying their primary habitats and make sure these areas are protected.