The Charming Wonder of the Galapagos Sea Lion 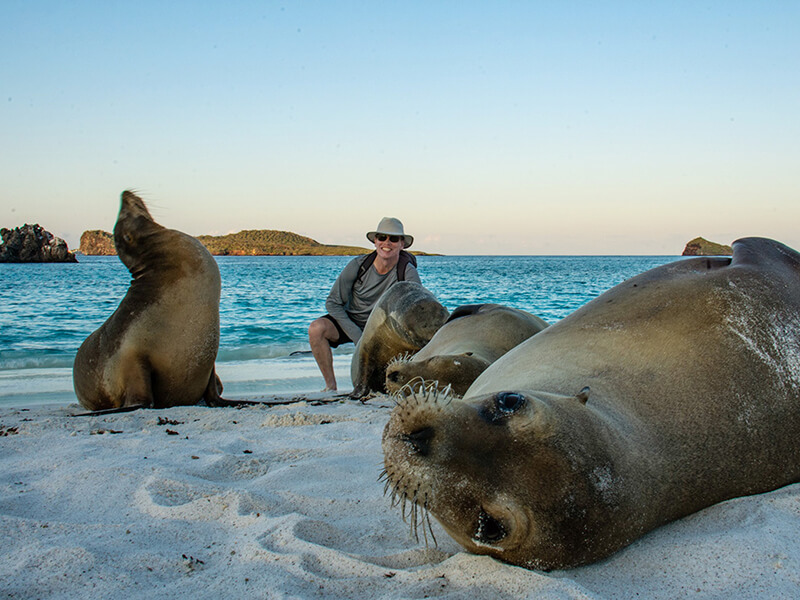 Perhaps the most common of all the species you will see while cruising in the Galapagos Islands, is the Galapagos sea lion. Their sounds are unmistakable and their sleek design allows them to frolic in the crystal clear waters of the marine reserve. As one of the planet’s most playful creatures, they are a joy to watch and it is always hard to know they are in their wild environment. The best way to get to know this species better is to watch them both on land and underwater. In Galapagos, no one gets tired of watching sea lions!

Did you hear Pinniped? What is a Galapagos Sea Lion anyway…

In the world of systematics, nothing describes a Galapagos sea lion better than its order: Pinnipedia (fin-like foot). Thus, here you find the walrus, true seals, and sea lions. Galapagos sea lions are part of the Otariid family which are all the eared seals (sea lions and fur seals). Scholars agree that its ancestor has to be the California sea lion, which makes the Galapagos sea lion a true equatorial pinniped. Strong northerly currents may have forced some individuals to swim and drift far south and Galapagos offered a suitable habitat for all individuals.

A Galapagos sea lion range in size from around 5 to 8 feet in length, and weigh 110 to 550 pounds. Females are smaller and a lighter color brown than males although this is harder to distinguish when they are wet. Like all sea lions, they have the ability to prop themselves up on their front flippers to waddle around on land. In the water, their grace and speed come into play. These marine mammals are incredibly graceful and fast and can perform almost a water ballet for those who are lucky enough to encounter them. 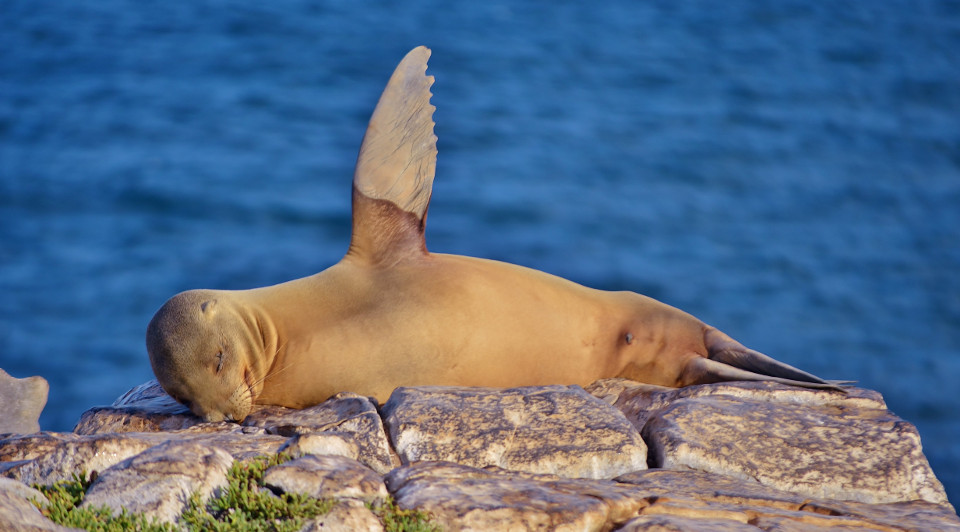 Two kinds of creatures from the seal/sea lion family are known to frequent the Galapagos Islands. These are the Galapagos sea lion and the Galapagos fur seal. Their names are deceiving as both of them fit the pinniped classification from this family instead of the phocid, or true seal. Fur seals are their own distinct group outside of the sea lions.

If you’re wondering about differences between true seals and sea lions, there are a few key features that make it pretty easy to tell them apart. Otariids (sea lions and fur seals) move around on land by propping themselves on their front flippers. A true seal does not have the bone and muscle development to support themselves on their flippers, so their time on land is one long belly scoot or back roll. Sea lions also have external ear lobes, which makes it easier to tell one from the other when all you can see is a head above water. During your trip to the Galapagos, only fur seals and sea lions are present, so there is no chance to get them mixed up with true seals. 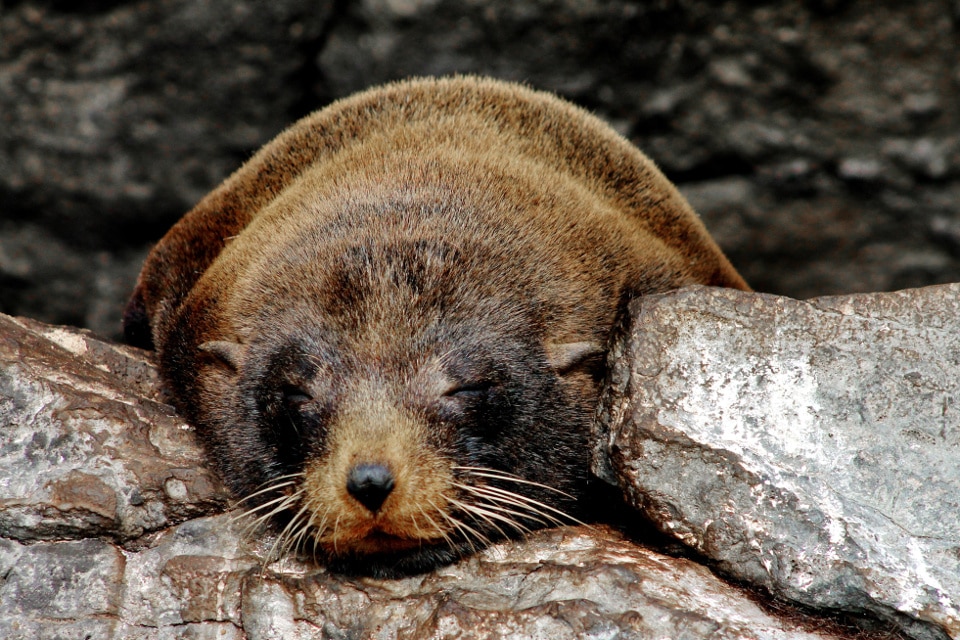 Though they might seem very similar, the fur seal and the sea lion are different species

Now, size is the easiest way to distinguish a fur seal from a Galapagos sea lion. The Galapagos fur seal, which is under 3 feet in length at adulthood, is the smallest of all seals and sea lions. This feature alone makes them quite unique. Also, they inhabit rocky and ragged shorelines exclusively with direct access to the ocean, while sea lions can use beaches or rocky coasts. Swimming with both species is an absolute delight. Once you have seen both types, the size distinction will be clear. Your onboard naturalist can also help you with identification.

Ever Wondered the Term “Delayed Implantation”?

Galapagos sea lions have a harem-like structure where a single male will have many females in his breeding group and will be very territorial over his mates. Because of this mating structure, other areas of the island have non-territorial males who did not get any mates this breeding season. They tend to roost together, eating and building up their chance to try again to gain some females the following year. As males invest huge amounts of energy guarding, protecting, and mating, there comes a point in which no energy is left and that may leave a window of opportunity for any potential male in a more fit condition.

If you are hiking, snorkeling or enjoying some coastal exploration, it is important to remember these animals are in their wild environment where mating or birthing sea lions is their absolute priority. Certain aggressive behavior could be witnessed in certain territorial males and females who have recently given birth. Female sea lions have an amazing reproductive adaptation in their evolutionary history; it’s called delayed implantation. It is a reproductive strategy used by almost 100 different mammals in seven different orders. Here, the embryo does not immediately implant in the uterus, but it is maintained in a state of dormancy. No development takes place during this period and as a result, the normal gestation period is extended, sometimes by as much a one year. This obligated diapause is the mechanism to allow mammals to time the birth of their youngsters with favorable environmental feeding conditions. Clever!

How to See Galapagos Sea Lions

There are three main ways to view Galapagos sea lions. Hike to a visitor site with a Naturalist and explore their beaches from a safe, respectful distance. You can spend hours watching their daily whereabouts. You can also kayak or enjoy coastal exploration for spotting certain favorite lounging shorelines. You can also see them underwater when you are diving or snorkeling at some of the island’s extraordinary water sights.

Since Galápagos Sea Lions prefer beaches and shallow access to the ocean, newborns have a continuous playground to stimulate certain senses and development of movement skills.  While the majority of pups are born in late August, September, and through mid-October, development continues all through their “pup stages” and this implies being playful in the water, as well as highly curious while on land. This goes on until around June/July, but subadults retain their gregarious behavior by “hanging out” with other individuals. Guests love to see sea lions in general, but their puppy months leave unique memories. Sea lions are part of the BIG15 wildlife list of the Galápagos Islands. If you are lucky enough to see a Galapagos sea lion underwater, they have been known to swim gracefully around snorkeling outings and entice explorers to play.