The Social Network of the Galapagos Mockingbirds 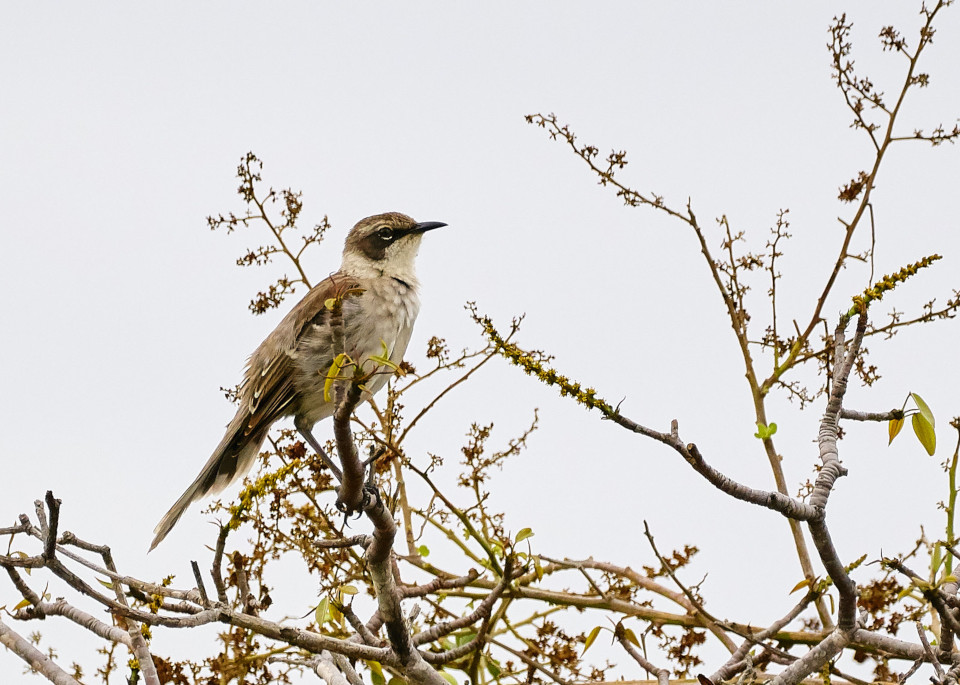 Mockingbirds are known for being quite curious and pesky birds, able to imitate the songs and call notes of up to 36 other songbirds (their Latin name mimus actually means ‘mimic’). However, while Galapagos mockingbirds are certainly extremely curious, even landing on tourists’ heads and exploring backpacks, they are not known to imitate the calls of other Galapagos birds. Instead, they are renowned worldwide for their role in assisting Charles Darwin to form his theory of evolution.

The Galapagos mockingbirds can easily be distinguished from other birds in the archipelago due to the delicate brown and grey streaks that decorate its generally white plumage, along with its black, curved beak. They can also be recognized by their black legs and feet, and the delicate white ring around their eyes.

Galapagos mockingbirds have quite a complex social organization, not altogether common among other mockingbird species. The birds live in social groups within a determined territory, to which they are strongly attached and territorial. The birds avidly defend their territory, fanning their tail and flicking their wings away from their body, while producing loud calls to scare away intruders.

A community of mockingbirds typically consists of around two to five adult birds but can reach anywhere up to 24 adults. Each group includes multiple breeding females that were born in the territory, but males in both number and behavior generally dominate them. The groups form a linear dominance hierarchy with the oldest male taking the dominant role, and the females ranking below the males.

Galapagos is full of WOW moments!

Among this group, breeding pairs are typically monogamous, formed by two individuals of equal rank; however, this is not always the case. For example, during years in which females outnumber males, the mating system may become polygamous, in which case it is not rare to see joint nesting. One of the more intriguing characteristics of this social structure is the practice of collective breeding, which is quite rare among birds. A breeding pair typically occupies their own individual nest, but all of the birds defend the territory collectively. Furthermore, it is not uncommon for multiple ‘helper’ birds to assist a breeding pair in rearing their young, even bringing the chicks food. This additional help does not affect the growth rate of the fledglings, but it has been found that those nests that receive help fledge younger than those that do not.

Although several studies have been carried out, experts are still not entirely sure why this collective breeding occurs. The benefit to the father bird is clear: assistance from a helper bird reduces the amount of food he must acquire for the young. Furthermore, it is also possible that the mother benefits from this practice, potentially producing more chicks throughout her life as a result. However, what is the benefit for the helper birds? It is possible that the helpers take part in chick rearing to ensure that as many of their genes as possible are passed on to the next generation since the helpers are typically older offspring of the breeding pair. On the other hand, young male mockingbirds may stay with their parents and assist them in chick rearing because of the level of competition in establishing new territories, joining a different territory or gaining a mate. Mockingbird defends vigorously their territories, especially during their breeding season, and it does not help that the sex ratio is typically biased towards males, with approximately one-third more males than females. However, no matter the reason for this collective breeding, it is an excellent adaptation to living in the Galapagos where the climate can vary quite greatly due to fluctuations such as El Niño.

Where to find Galapagos mockingbirds

The Southern Galapagos Isabela II itinerary includes all four species in merely four nights, five days. Eastern itineraries of Santa Cruz II cruise and La Pinta, with four nights, five days, include three of four species. Galapagos Mockingbirds can be found on the majority of the Galapagos Islands, except Champion (close to Floreana), Española and San Cristobal islands. These three islands, each harbors its own species of Mockingbird. They are particularly abundant in arid lowlands that have coastal scrub; however, they also inhabit mangroves and damp forests.