Galapagos Land Birds during the First Rains of Hot Season: Birders Get Ready! 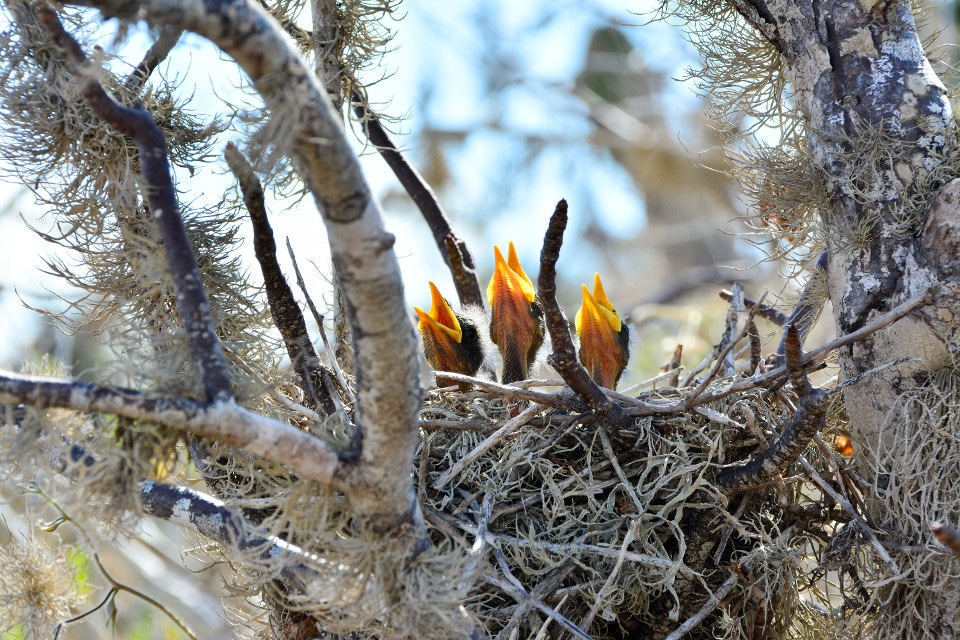 Probably the most astounding fact that doesn’t get mentioned enough about the Galapagos Islands is that virtually all of the amazing wildlife can be seen year-round! Depending on what time of year you choose to visit, you might find the unique species of Galapagos either courting, mating, building nests or laying eggs. When it comes to land birds in Galapagos, amazing changes in behavior and color occur with the arrival of the first rains during the hot season. Some light drizzles start as early as December – a transition month between the dry and the hot season – while the month of January serves as the prime time for many of the Galapagos’ most iconic land birds to start to awaken as they spread their majestic wings in favor of the budding and beautiful flora. In this blog, we invite you to let yourself be taken away by the music of the first tropical rains that come drizzling in with the hot season as you open your eyes wide to soak in the wonderful features and behavioral patterns of these Galapagos land birds.

Almost every land bird species depends on the rainy season in order to survive, especially the ones that inhabit the arid zones of the islands. Life needs water to thrive and rainfall is the first step in every living creature’s food chain.

When the rain comes, there are three different patterns of vegetation growth:

This “ecological system” in Galapagos is specifically designed to encourage birds to reproduce when, and only when, they have food available. The flourishing flora throughout the Galapagos Islands during the first bit of rainfall means that consumable sources of energy are about to emerge, which almost immediately triggers unique changes in the behavior for Galapagos land birds. These changes can manifest themselves in the following ways:

The peak of reproduction periods for Galapagos land birds is when rainfall reaches its highest levels, which typically occurs sometime in the middle of the hot season.

What happens to Galapagos Land Birds after the First Rains?

Once again: with abundant food levels comes the great desire to want to make the most of it, which is to say – reproduce. As a result, Galapagos land birds invest a lot of the energy they consume into making themselves look as extravagant and eye-catching as possible to attract potential mates.

In addition to this, Galapagos land birds will begin to flaunt their feathers in unique ways, given that simply having beautiful feathers and the mere virtue of being “alive” won’t cut it for the females. The females need and use these behavioral cues to decide on whether or not to say “yes” to the males’ gambits and courtship displays.

Sometimes these behaviors manifest themselves in ways that see Galapagos land birds turning into engineers and making fake nests for their potential mates (which could be more-or-less seen as a “test drive” of their abilities as a compatible and worthy mate).

A Galapagos mockingbird perched on a branch during the hot season. Photo credit: Pedro Szekely

Galapagos finches have a series of different feathers (primary, secondary). During the rainy season, some of the finches’ most important feathers are replaced with extravagant/showy feathers. The beak is also another feature of theirs that changes, transitioning from beige to a shiny black.

Even though most species are cryptic or melanistic – an adaptive behavior in which the animal produces no color to attract partners or scare predators – others, like finches, go all out during the rainy season. The finch is probably the Galapagos land bird with some of the most evident physical changes.

Galapagos hawks are polyandrous. One female has several males. When the rains start, the female will find the best spot/territory. In the case of these Galapagos land birds during the first rains of Hot Season, the females will find the best piece of territory a little before the rainy season begins and have the males come to her. The time this courtship behavior as such so that there’s an abundance of food available for when their offspring are born.

Here’s a list of Galapagos land birds that are predominantly active during the first rains of the hot season in Galapagos:

Because the rains last around 4 months, this means land birds have to be fast if they want to find a mate and reproduce. It all comes down to the food surplus generated by the rains. This is also the reason why during special meteorological events such as La Niña, when rain is scarcer, lands birds tend to be less successful when trying to reproduce. Only the best and strongest ones will be able to produce offspring, which also works towards improving the species gene pool. On the other hand, during El Niño, when rain can last up to 8 months, there is such an excess of food that the situation can turn promiscuous. For example in the case of the finch, scientists have observed one of the few situations in which natural hybridization happens!

See for yourself what happens during this amazing period in Galapagos aboard the Santa Cruz II Galapagos cruise!