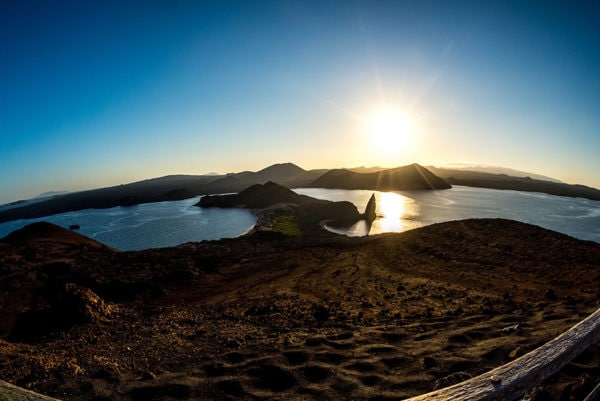 The Galapagos Islands are never at peace, but instead are undergoing a continual process of evolution, adaptation, and alteration. Life and the very form of the islands have been battered by ongoing seismic and volcanic activity, fluctuating El Niño and La Niña climate patterns, and the confluence of three major ocean currents, all a world away from modern life. The archipelago is a breathtaking example of the strictly interconnected relationship between life and natural events (both calamitous and advantageous) creating one of the most unique ecosystems and some of the most unusual life in the world. Perhaps most importantly is that these natural processes have gone almost unaffected, with approximately 95% of the islands’ pre-human biodiversity still intact. However, these impressive factors have not gone unrecognized by global spectators. The Galapagos Archipelago is the proud bearer of a variety of awards for its incredible marine reserve, complex geological processes, natural beauty and more.

The place to go

Located on the north side of San Cristobal Island, this place has a beautiful beach at the end of a three-hour trail

The Galapagos Archipelago has frequently been recognized as a leading scuba diving destination thanks to its spectacular marine reserve. In addition to the World Travel Awards, in 2010, Scubadiving.com gave it Best in Overall, Health of Marine Environment and Marine Life in the Pacific. This Scuba Diving magazine publishes an annual ranking of diving destinations around the world. The Galapagos’ high score is due to the variety of marine life Divers are able to observe. The magazine remarked that divers have the possibility of seeing “whale sharks, a pod of dolphins, sea lions, a school of hammerheads, a large Galapagos shark, hundreds of almaco jacks, blue jacks, Galapagos groupers, masses of blue-striped chub, yellow-fin tuna, blue runners” in just a single dive, to name a few.

However, for those seeking a more relaxing and luxurious vacation, the islands are also very satisfying. One of the world’s leading luxury travel networks, Virtuoso Travel, named it the Most Alluring Island Escape in its award-winning magazine Virtuoso Life. The Galapagos Islands also won Best Family Destination and was awarded second place in Best Outdoor Adventure.

The Santa Cruz II is one of Galapagos luxurious most known cruises.

Perhaps the most notable and distinguishing recognition that the Galapagos Archipelago has been awarded is its title as a world heritage site, granted by UNESCO. UNESCO aims to promote the “identification, protection and preservation of cultural and natural heritage around the world considered to be of outstanding value to humanity.” As such, this title is a great honor for the Galapagos Islands and those who seek to protect the archipelago.

The Galapagos Archipelago was among one of the first destinations added to the World Heritage List in 1978, and not without reason. Located at the intersection of five ocean currents, UNESCO describes the Galapagos as a “‘melting pot’ of marine species.” The classification was based on four different criteria: the diversity of Galapagos wildlife and geomorphological forms; the continuum of geological and geomorphological features formed by the joining of three major tectonic plates; the unique examples of the effect of ecological, evolutionary and biogeographic processes on flora and fauna, as well as adaptive radiation; and, their incredibly high levels of species diversity and endemism. Begin your Galapagos tour today.

The Galapagos Archipelago is an outstanding example of the interaction between natural events, and plant and animal life, as well as the interaction between marine and terrestrial biotas, providing experts with critical information regarding the evolution of species in continually changing environments. Nevertheless, its purity, beauty, and diversity make this a one-of-a-kind destination for families, divers and explorers, as has been proven time and time again.