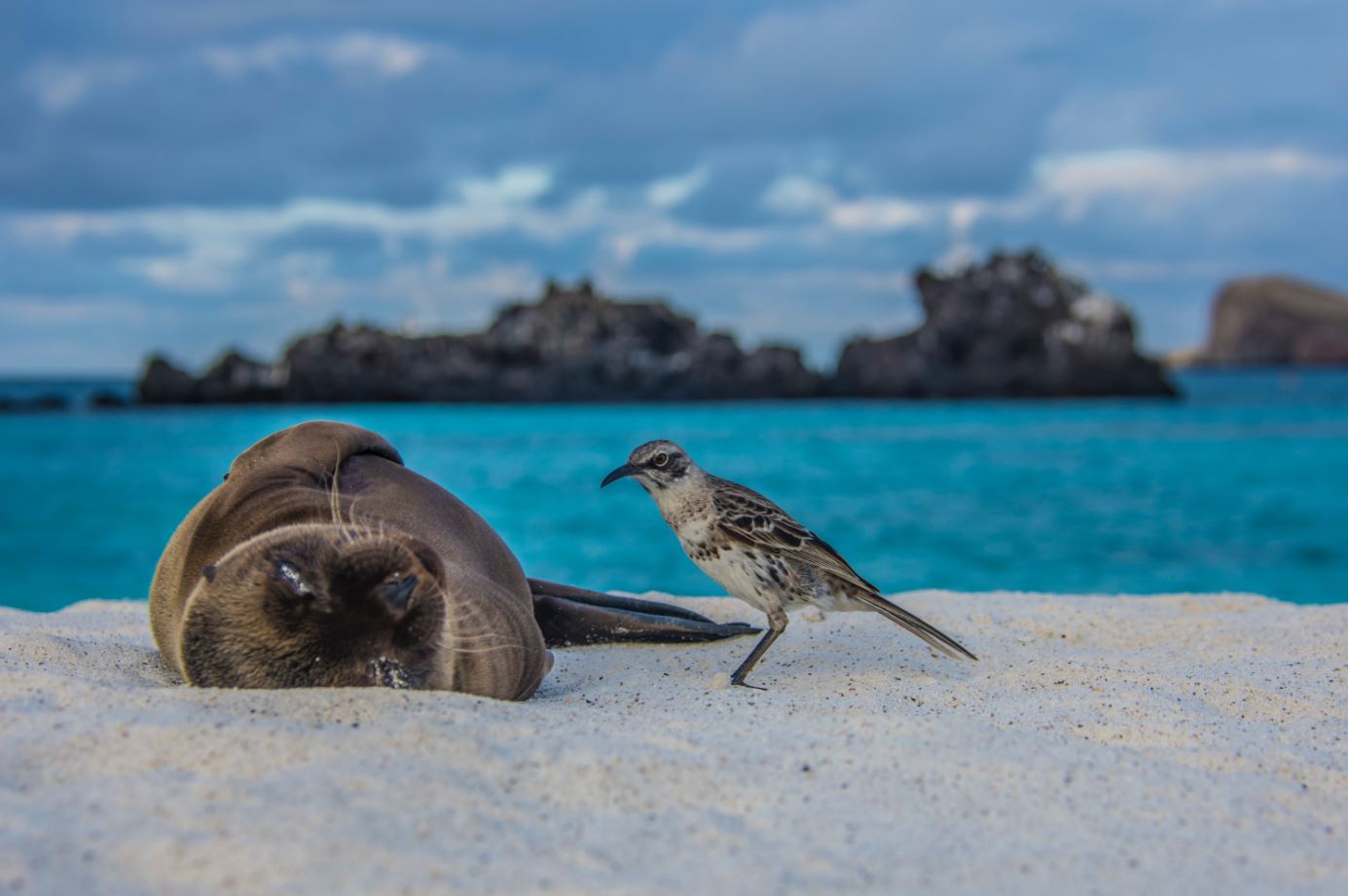 The Galapagos tortoise may live up to 150 years in the wild, and a captive animal may live up to 170 years. These extraordinary creatures can survive for months without food or water and can float, which is considered the reason their ancestors were able to travel on the ocean currents from mainland South America to the Galapagos millions of years ago. There are several different subspecies found on different islands that have slightly different shaped shells. Considered an endangered species in 1959, the captive breeding program has brought seven of the eight subspecies back from the brink of extinction. You can visit the captive breeding program at the Charles Darwin Research Station on Santa Cruz Island or at the Cerro Colorado Station in San Cristobal Island.

Interesting Galapagos Islands facts: some people speculate that marine iguanas inspired the tales told by pirates and explorers of dragons in the new world. These huge lizards live on the rocky shores of virtually all of the Galapagos Islands. Millions of years ago, the land iguana could not find enough to eat on land and thought the seaweed looked pretty good. Over the millennia, they learned to dive up to 30 feet and harvest and eat seaweed. The reason they appear like dragons is their reptilian appearance and a salt gland at the top of their head that filters excess salt from their blood and expels it in a plume of mist from their nostrils.

Even though the Galapagos Islands are right on the equator, the penguins stay cool because of the water from the Humboldt Current and the cool water brought up from the deep sea by the Cromwell Current. The penguins are found on the west coast of almost all the islands. The best way to interact with the penguins is by diving or snorkeling. They are clumsy on land, where they sleep at night, but they are a marvel of aerodynamics in the water.

The Galapagos Islands were designated the first National Park in Ecuador in 1959 and one of the first designated UNESCO World Heritage Sites in 1978. Interesting Galapagos Islands facts – about 97 percent of the entire area of the islands is a national park. The park authorities control tourism, and this is a boom for visitors who take an expedition cruise. You can experience all there is to see and do without crowds of tourists.

A couple of flightless cormorants nesting.

The flightless cormorant is endemic to the Galapagos. It has had no natural predators for millennia, so it never had to fly. Today, this species is the largest cormorant on Earth. A big bird with tiny wings that are useless for flying, it is an ace at diving.

Frigate birds have tiny bodies with huge wings. They cannot take off on water, so they soar over the waves. The male has a brilliant red pouch that it inflates to impress females.

For more than 150 years, people on the Galapagos Islands have been growing Arabica typical coffee plants and exporting the beans all over the world. You may have had a latte at Starbucks that was made with Galapagos coffee as the company is the biggest buyer of these beans.

The Galapagos Post Office is a popular touristic site.

On Floreana Island at Post Office Bay is a barrel in which visitors place letters and remove letters. Anyone can place a letter to someone in another country if they are willing to take a letter that is addressed to someone in their country. No stamp is required. This was started more than 200 years ago by lonely whalers who stopped in the islands, and the tradition is still going strong today.

Snorkel and Dive in a Volcanic Cone

Devils Crown is a submerged volcanic cone in which there are circular currents that you can ride with a huge variety of marine animals such as sea turtles, sharks, sea lions, and much more.

It may be helpful to have an idea about the wonderful adventures that await you when you visit the islands and learn about interesting Galapagos Islands facts. These are just a very few of the sights that you may see. From flocks of pink flamingos to docile white-tip sharks, you will be amazed watching wild animals that seem just as interested in watching you.