Galapagos Hawk on Fernandina: A Surprise from High Above 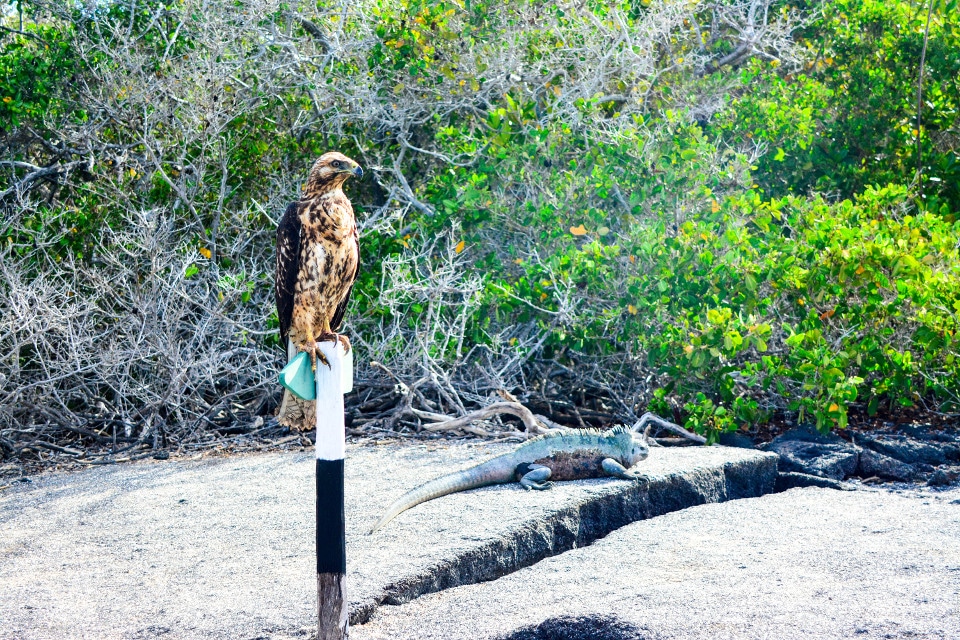 Fernandina is one of the smallest and geologically “newest” islands in the archipelago. It still has an active volcano that erupted about 4 months ago and, because of its high level of activity, it is constantly changing. On this occasion, we were all pleasantly surprised upon arriving at the island by witnessing a Galapagos Hawk on Fernandina. This experience set the tone for the rest of our journey in a remarkable way.

Every day is a special day in the Galapagos. This afternoon was no different.

At Fernandina, guests experience a dry landing over a man-made cement dock. It is a very small and narrow area with just enough room for 16 people to disembark. After getting there, each group begins to walk as quickly as possible to the next spot so as to allow the next group of guests to disembark. After crossing a dense and narrow mangrove forest, the path opens up and groups will be able to distance themselves from each other as one group heads inland while the other group heads off to the right towards the shore. The nice part about this particular afternoon was that, right at the beginning of the trail, sitting right on the marker that limits just how far visitors can go, there was a young Galapagos Hawk on Fernandina! The top predator of the Galapagos was right there in front of us! Sitting calmly, as if on a pedestal, allowing everyone to admire it.

The Galapagos hawk is the islands’ apex predator.

It was also nice that, not too far from where we spotted it, there was a big marine iguana, which gave us the chance to witness not one but TWO BIG15 Group of iconic species right there in the same spot, side by side! They were so close that it was even possible to have them both appear in the same picture. The funny part was that it was a rare case of having a predator stand right next to its prey, too. Except that, in this context, the hawk was simply too young and the marine iguana too large for this Galapagos hawk on Fernandina to make a move, so nothing really happened. The hawk was kind enough to stay there for all the six different groups of guests that arrived.

After seeing the hawk so early in the walk, we were all pretty excited and started walking along the trails, full of enthusiasm. Fernandina did not disappoint! My group had a number of younger people that managed to walk at a fast pace – the reason for why we were able to make our way to a distant spot so quickly. Far from the coast, there is a secret lake surrounded by mangroves. It is a nice and secluded spot and, on this occasion, we were able to find turtles in the water swimming right next to a school of rays that were casually going around in circles.

Guest observing the Galapagos wildlife that lives amongst the lava rocks.

We spent a long time at that special spot and then we continued our walk to other parts of this visitor site on Fernandina Island. As usual, we were able to see tons of life there in the form of little lava lizards catching a quick bite on some grasshoppers. Some huge alfa male sea lions were also busy patrolling their territory not far from where we were. Looking back, Fernandina had it all in stock for us.

The Best for Last: Dessert for a Galapagos Hawk on Fernandina

The best part of our visit this day, however, was towards the end of the excursion. As we were all going back to the dock to hop on the pangas back to the ship, we had to go the same way that we came in, via the man-made dock. The coincidence was that this time, there was another Galapagos hawk on Fernandina except this one was a full-size adult. What’s more? It was actually feeding on the body of a dead baby sea lion!

It was on the ground, well protected and hiding in a lava fissure, yet the hawk could still see pretty much everything that approached it. It was a surprise for everyone to be able to get so close to it and our presence didn’t even seem to bother the hawk at all, as it continued to eat! Again we had enough time to take plenty of pictures and, even though not everyone wanted to see such a crude spectacle, everyone that wanted to had time to see it. This was such an incredible way to say goodbye to Fernandina, showing once more that the circle of life is in full effect in the Galapagos!

Galapagos hawk feeding on its prey.

Book your tour today and partake in this incredible, once-in-a-lifetime experience aboard our Galapagos itineraries!