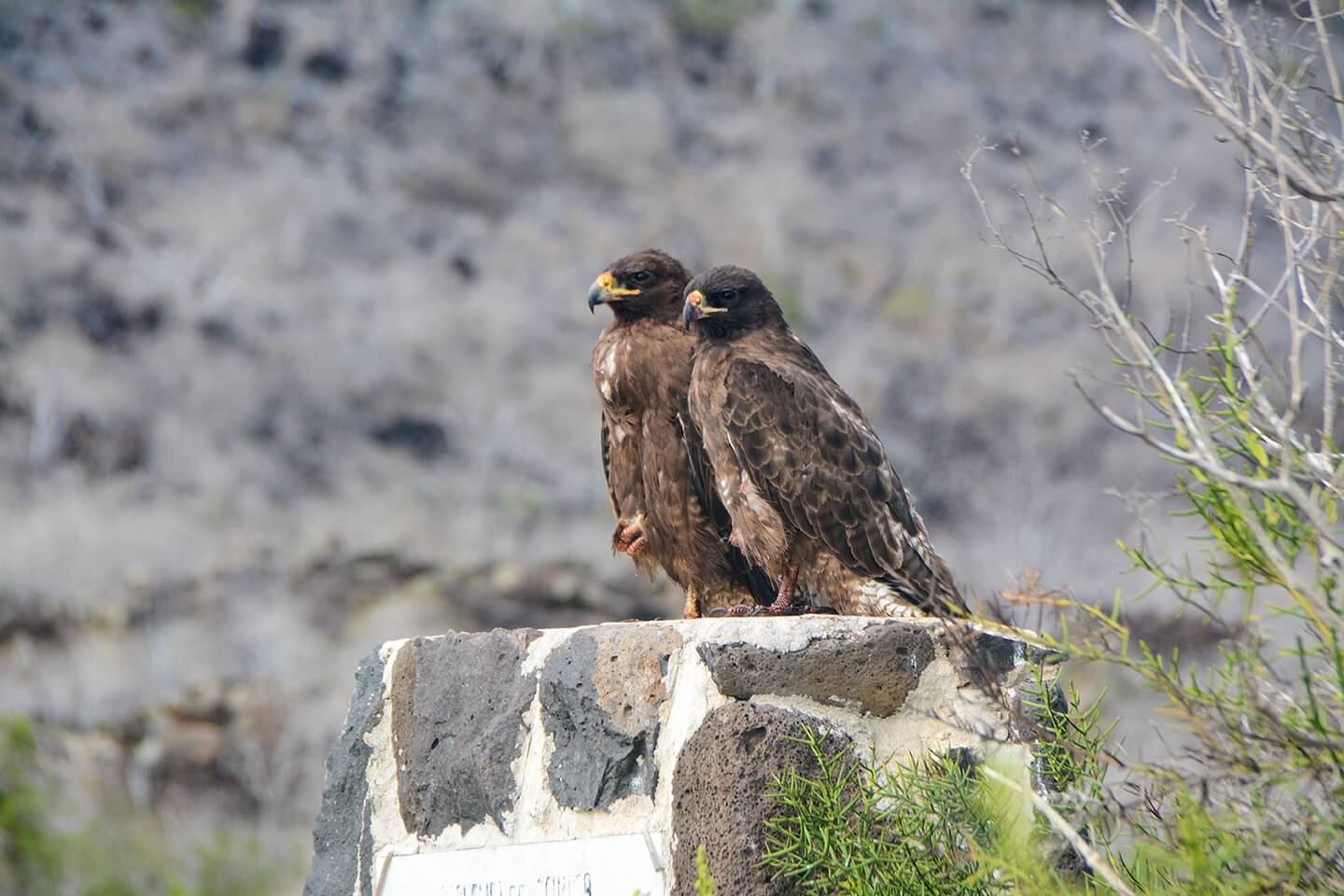 Bold and majestic, the Galapagos hawk glides across the deep blue skies of Galapagos, its brown and black feathers giving its flight an elegant hue. An apex predator in this special archipelago, the Galapagos hawk has nothing to fear and can bask freely on the ample supply of food that crawls, flies and swims throughout the islands. It’s not uncommon to see them hunting in a group of two or three, heading way up high into the sky 50-200 meters (164 – 650 feet) before descending to the ground to feast on their prey. On this day, however, the Galapagos hawk is flying around while looking for something rather special – a mate, to be precise.

With the absence of seasons thanks to the Galapagos Islands’ close proximity to the equator, the Galapagos hawk has no established breeding pattern. For these magnificent and well-off birds – enjoying their own paradise of sorts – mating seasons don’t exist. In fact, acts of mating for the Galapagos hawk tend to occur daily, either while in flight or while perched. The gambit is done on the male’s behalf, typically flying close enough to the female to make fake attacks (what’s sometimes called “dive-bombing”) until the female eventually concedes or flies away. Should she accept the male’s passive-aggressive gestures, the female Galapagos hawk will fly down to the ground below, either seeking privacy in a bush or tree, as the male follows closely behind.

A Galapagos hawk during its courtship ritual.

An Asymmetrical Form of Fidelity

Sure enough, the courtship of the Galapagos hawk leads to a very intimate and cooperative nesting period, whereby the female and male take turns to keep an eye on their nest and/or incubating their clutch of eggs. They’ll also even share the task of feeding their hatchlings. But monogamy is the one facet of their relationship that is not mutual or shared equally. In contrast to the male who remains exclusively loyal to his mate, the female can have up to several different males throughout the year. Should there be more than one male present in the life of the female during the nesting period, she will go from nest to nest to help with the incubating and feeding duties.

A kettle of Galapagos hawks.

A Home for the Long Run

Nests that are built by the pair tend to be situated in short trees, lava cliffs, or sometimes even right on the ground. These are recurring nests in the sense that they are used over and over again throughout the years, sometimes becoming large enough to measure up to a meter (4 feet) in diameter as they grow and are constantly maintained with added layers of grass, leaves bark or anything soft found throughout the islands. The nest is capable of holding anywhere from one to three eggs. After hatching, these new baby hawks will be reared by their parents for approximately two months before flying off on their own.

A good chance to take photos!

The Galapagos hawk is present on all of the Santa Cruz II Galapagos cruise’s itineraries (Eastern, Western and Northern) and is one of the most iconic animals of Galapagos wildlife. If you’re lucky, you might even get to witness them performing this very ritual!