The Mysteries of Galapagos Geology 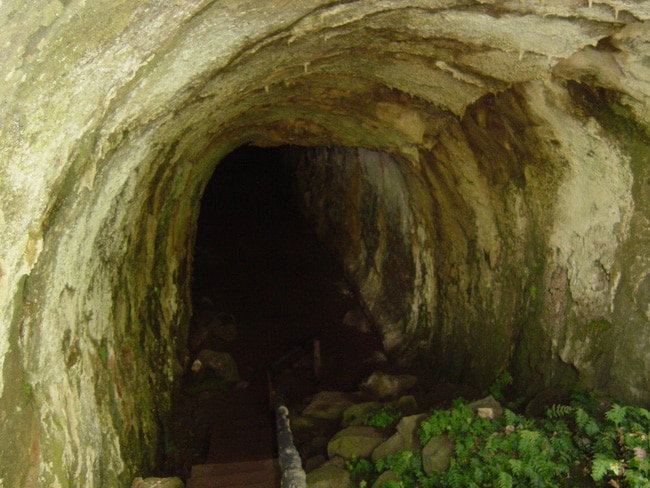 The Galapagos Islands represent a rich paradise for geology and nature lovers alike. This archipelago is the living result of age-old geological processes and proof of our ever-changing world. Each island displays its own unique formations where visitors can witness firsthand the mysteries of Galapagos Geology, the miraculous processes of land formation, from underwater lava caves to enormous sinkholes.

One of the more unknown wonders of the Galapagos Islands is the various lava tubes that tourists can descend into, becoming enclosed within the jagged walls of an ancient lava flow. These tunnels are the remains of enormous pahoehoe lava flows that at one point poured over the islands, eventually subsiding and leaving only their shell behind. The flows began as several individual flows called “toes,” which then coalesced into one enormous tube. As the outer lava hardened into a thick skin, it insulated the inner molten lava allowing it to flow for several kilometers. Scientists recently calculated that the lava inside these tubes only loses 1oC of heat per kilometer. The longest lava tube in the world, Kazumura in Hawaii, extends for 40.7 miles at 3,614 feet beneath the surface and formed around 500 years ago. The longest lava tube in the Galapagos, Cueva del Cascajo, is on Santa Cruz Island and is the 50th longest in the world.

Lava tubes offer a firsthand look into the formation of rock originating from deep within the earth’s crust. Small grooves mark the jagged walls of the tubes, indicating the different levels of the flow as it subsided. Some of the tubes are at ground level and offer a more casual experience; however, others are deep below the earth, buried in time. Guests can descend a ladder into complete darkness and explore Galapagos geology, an activity rarely seen by man.

Visitors are welcome to visit Galapagos’ lava tunnels. Like many other places in the islands, they must be accompanied by a guide at all times. Photo by: Michael R Perry via Flickr

Santa Cruz is the most well-known island for lava flows, which are particularly abundant in the highlands. Some of the most frequented are El Mirador and Bellavista caves; however, there are also several underwater caves that offer one-of-a-kind spelunking and snorkeling experience, including the opportunity to swim with white-tip sharks.

However, apart from its varied landscape and lava tunnels, Santa Cruz also holds perhaps the most mysterious of all lava formations in the archipelago. Measuring 1,300 feet across and 2,300 feet deep, Santa Cruz Island boasts the largest pit crater in the world. As lava is expelled from underground chambers during volcanic eruptions, it leaves gaping holes at varying depths under the earth’s surface. When the chamber is located close to the surface, the overlying ground is left with little or no support once the magma is expelled, and is liable to crash inwards, forming abyss-like holes. This is exactly what happened with the Los Gemelos (the twins). These two pit craters sit side-by-side and have become a popular tourist site in the Galapagos Islands.

However, while Los Gemelos is completely safe to the public (as long as guests keep their distance from the edge of the openings), these craters can potentially be very dangerous. When the land collapses, large quantities of natural gas are often released from the ground. In 1971, the Darvaza pit crater formed in Turkmenistan during an oil drilling exploration. As large amounts of gas were expelled into the air, the operators attempted to control it by lighting it on fire. This pit continues to burn to this day and is now quite appropriately termed “The Door to Hell.”

Caves – Complete the mystery of the Galapagos Geology

To complete the mystery of the Galapagos Geology and it’s remarkable geological formations, pirates also played their part in forming the islands during the 16th to the 18th century. The Galapagos Islands host several caves, which are popular for both land and water exploration. However, at least one of these is known to be manmade. The pirate caves on Floreana Island were carved out of soft rock, most likely to serve as shelter from the strong sun and rain. This island was popular among pirates due to the fact that it contains one of the few sources of freshwater in the archipelago. They would stop on the island to replenish their supply of meat and water. Today, these caves and tunnels made by the pirates continue to stun visitors to the islands with their history.