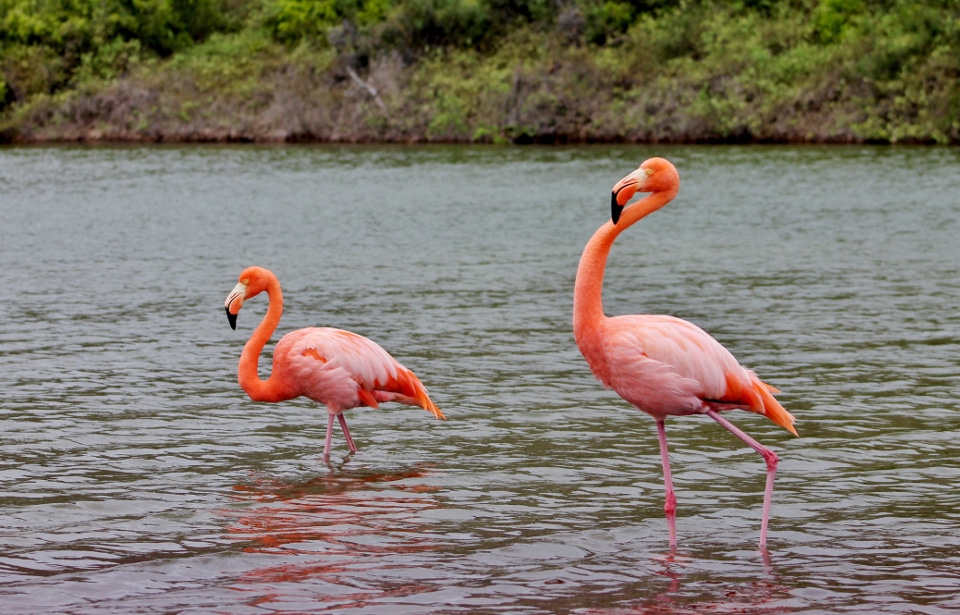 It’s courtship season for the Galapagos flamingo! The months of July and August are the best time of the year for those avid bird watchers who would like to see these beautiful birds (also a Big15 favorite) in action. Seen in both the Santa Cruz II’s Northern and Western Islands Itineraries, the American flamingo, or Phoenicopterus ruber, is always a treat to watch. Its vibrant color, funny-looking legs, elegant neck, and the fact that it is the only one of its species found this far to the southwest, make it a spectacle. Learn a little more about this beautiful bird before heading to your magical Galapagos cruise and have your camera ready to capture the Galapagos Flamingo as it shows off with its best moves.

Unlike their cousins in other parts of the world where they can be found by the hundreds, Galapagos flamingos have adapted to breed in smaller groups. This is perhaps due to the fact that in the Galapagos they are found in much smaller numbers and are very limited in their distribution. The Flamingo is such a highly sociable bird that even their courtship rituals and nesting habits occur in groups. When courting, many individuals parade and participate in an intricate dance. They walk slowly from one side to the other with their necks cocked up, while flashing their primary feathers – the feathers at the tip of their wings, which usually have the brightest dark and pink colors. Even though they are believed to be a monogamous species (just like their distant relatives – the penguins) they have also been observed in trios, male couples, female couples, or small groups.

Where can they be seen?

Just a few of the Galapagos Islands hold the appropriate conditions for these birds to flourish. Brackish-water lagoons are preferred by the flamingo, and not all islands have the geological characteristics that allow such formations. But flamingos are excellent long-distance flyers and they can move easily from island to island and from the lagoon to lagoon, in search of food and more favorable conditions. Even though the main breeding lagoons of the Galapagos flamingo are found in the southern region of Isabela Island, other smaller lagoons in the islands of Floreana, Santa Cruz, and sometimes San Cristobal, are common sighting areas.

How Do They Get Their Pink Colouring?

There are two reasons behind the emblematic color of these birds emblematic. The first one is connected to their diet, consisting mainly of brine shrimp or Artemia.  This crustacean is especially rich in carotenoids – a plant pigment that causes some fruits and vegetables to be red, yellow, and orange. These hues are then transferred to their feathers. Interesting fact: the Galapagos flamingo is the brightest-colored flamingo in the world. The second reason is its uropygial gland located near the base of its tail, which transfers the pink pigments to its coat. It’s no wonder both that the etymology behind both it’s common and scientific is derived from its striking color. Flamingo, from the Spanish and Portuguese flamengo, or flame-colored, comes from the old word flamenc, meaning flame. On the other hand, Phoenicopterus literally translates from the Greek to blood-feathered.

The Galapagos flamingos are smaller than other types of flamingos found in North America.