Galapagos Finches, one of the most renowned species 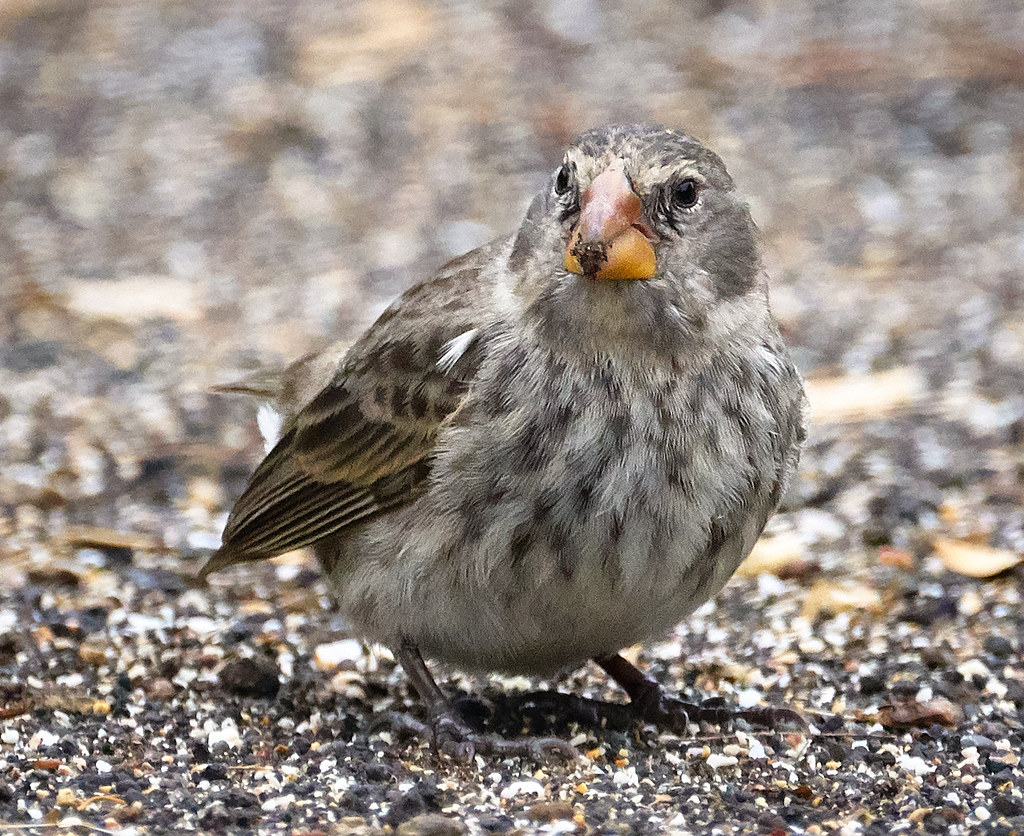 Compared to the clownish blue-footed boobies and colossal giant tortoises, the dull little bird with a very ordinary song that hops around the Galapagos Islands is, to be blunt, extraordinarily unremarkable. However, this little bird had one of the most important roles in changing society’s appreciation of evolution and man’s role in the world. Darwin Finches, also known as Galapagos Finches, are the centerpiece of Darwin’s theory of evolution by natural selection and one of the most renowned species in the Galapagos Islands.

Galapagos Finches are relatively similar in color and shape and, in fact, do not differ much from the common garden finch, making it almost impossible to differentiate between them in the wild. They are characterized by short tails and small, rounded wings with a dull black, brown or olive plumage. Their beaks also have the same coloring; those in the non-breeding stage have yellow/orange beaks, while those inbreeding have inky black beaks. The similar coloring, habits, and size of the 13 species are a clear reminder of the birds’ common origin. However, the primary aspect that makes these birds particular is the shape of their beaks, which varies quite drastically between the species according to their habitat and diet.

Although they have taken his name, Charles Darwin gave very little credit to the Galapagos finches when he was in the islands, not even recognizing them all as finches. It was not until he returned to England and began to study his collections (with the help of specialists) that he realized that each of these birds demonstrated slight differences that were unique to the islands. Furthermore, he noticed a connection between these Galapagos finches and a much more common species on the continent of South America, leading him to wonder why each of these birds would have such slight variations, yet be so intimately related, as if the “species had been taken and modified for different ends.”

Based on Darwin’s observations, our understanding of evolution explains that a new species arises when the population of the ancestor is divided. As a result of this division, each population undergoes different natural selection pressures, and thus, different evolutionary processes; Galapagos Finches are a clear and spectacular example of this process. The extensive studies by Dr. David Lack were holding immense evidence that something a bit more complex than beak differences and colors was amongst these finches.  Although many other evolutionary biologists have been involved over the years in the study of Darwin’s Finches, nothing tops the work and contribution to science by Dr. Peter & Rosemary Grant. Not only finches became their passion, but luckily enough for both the Grants and science, they witnessed many drastic environmental conditions that took studies to a whole new level. Events like El Niño & La Niña were not expected in the overall scheme of studying the Galapagos finches, and these crucial natural events changed our understanding of natural selection on isolated islands forever.

Classifying the birds is a very difficult task because the variations between each species are minor. However, that is precisely why the birds are such a remarkable subject to study, and why Darwin was able to notice the special connection that exists between them. The general appearance of the birds is relatively similar, but the beaks of those birds that consume small seeds is different from the beaks of those that consume large seeds, medium-sized seeds, as well as from those that consume insects, etc. For example, those populations that consume a diet of large seeds tend to have significantly larger and more powerful beaks. On the other hand, if a population has more access to insects, their beaks will be much small and pointed, making it easier to snatch the grub.

Our qualified Naturalist Guides are ready to show you the differences between each species of finch.

The beak, behavior and other variations that exist between the finch populations are the results of a process known as natural selection in which slight and coincidental variations occur in individuals over time, which produce favorable or unfavorable outcomes in a certain environment and may determine the success of the bird. All of the birds evolved from a ground-dwelling, seed-eating finch, but, for example, if a group of these seed-eaters had found their way to an island that had a shortage of seeds, but a rich supply of grubs living in the tree bark, those birds with slightly longer, pointier beaks would have had more success in getting the bugs to eat and, as a result, would have been stronger and had more reproductive success. Thanks to this, the successful long-beak gene would be passed onto the next generation, while the unsuccessful genes would have died out. This is how the woodpecker finch appeared on the islands, and it is such a process that has attracted both experts and amateurs to the islands for decades.

Perhaps, there are two books that consolidate in modern times the knowledge of Darwin’s finches, and these can allow the scientist and the laymen to understand the importance and depth of natural selection.  One book is called, Ecology and Evolution of Darwin’s Finches by Dr. Peter R. Grant (also, his latest contribution is a new masterpiece called How and Why Species Multiply: The Radiation of Darwin’s Finches) and this book is for all scholars.

The book, winner of a Pulitzer prize, that brings down to our hands the beauty of natural selection is called The Beak of the Finch by Jonathan Weiner.  These books can add value to the understanding of Darwin’s finches and are all easily found in bookstores such as Barnes & Noble, Powell Books, Amazon, etc.