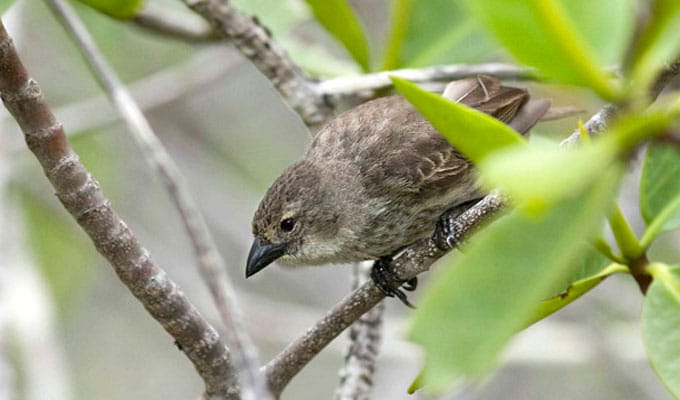 Saving the Mangrove Finch from Extinction

The mangrove finch is an unassuming little bird with dull brown/olive-toned plumage; however, it is better known across the world by its more general name: Galapagos Darwin Finch. Darwin’s finches are an important symbol of Darwin’s theory of evolution, as each of the approximately 13 species has very specifically and efficiently adapted to its particular environment. Nevertheless, the mangrove finch has faced increasing threats over the last decade, largely due to the arrival of introduced animals. In response, the Charles Darwin Foundation implemented a rearing and repatriation program in 2014 with the hope of increasing the population.

Until recently, there were several healthy mangrove finch populations on Isabela and Fernandina islands in the Galapagos Archipelago. However, in 2011, the global population of this little bird was confirmed to be restricted to just two small mangrove patches on Isabela. This habitat reduction, along with the small population size (around 100 individuals) and low reproduction rates meant that the bird was extremely susceptible to environmental changes and disease, classifying it as Critically Endangered according to the IUCN Red List of Endangered Species.

Troubles in Finch Paradise – Threats of the Galapagos Darwin Finch

The first Galapagos Darwin finch arrived at the islands several million years ago and has since very successfully evolved into around 13 different species. However, the increased frequency of extreme weather conditions and threats from introduced animals are threatening the success of many species in the Galapagos, including Darwin finches. The mangrove finch has faced significant losses due to the introduced parasitic fly, Philornis downsi, which causes high levels of nestling mortality, representing the second leading cause for nest failure (17%) in the 2012/2013 season (behind abandoned eggs [29%]). During this same season, nesting success for the entire population was a worrying 33%, with unknown causes accounting for 20% of observed failures. Introduced black rats are also responsible for unsuccessful nesting, preying on the eggs and nestlings. There have also been cases of interbreeding with the closely related woodpecker finch. All of these variables significantly decrease the finch’s gene pool, making it vulnerable to climate variations and new diseases. It is possible that one single outbreak of disease or instance of extreme weather could wipe out an entire population.

In response to their vulnerable state, the Galapagos National Park (GNPD) and Charles Darwin Foundation (CDF) have made extensive efforts to increase population sizes and minimize the threats the bird faces. For example, several programs have been implemented to eradicate, monitor and control populations of introduced rats. These have shown to be highly successful and have aided in increasing the nesting success rate of Galapagos Darwin Finch populations. Furthermore, since 2006, various conservation management techniques have been tested to determine the best method of ensuring the survival of the mangrove finch population.

In 2014, based on the results of these studies, the Charles Darwin Foundation launched a mangrove finch-rearing program. During the first year, 15 fledglings were released into the wild, and the program has since been repeated two more times on Isabela. The most recent release took place on April 26 of this year, where an additional 15 mangrove finches were released onto Playa Tortuga Negra on Isabela. Three weeks before their release, the finches were moved to a pre-release aviary where they were given items from the surrounding area to encourage foraging, such as fallen trunks and foliage. 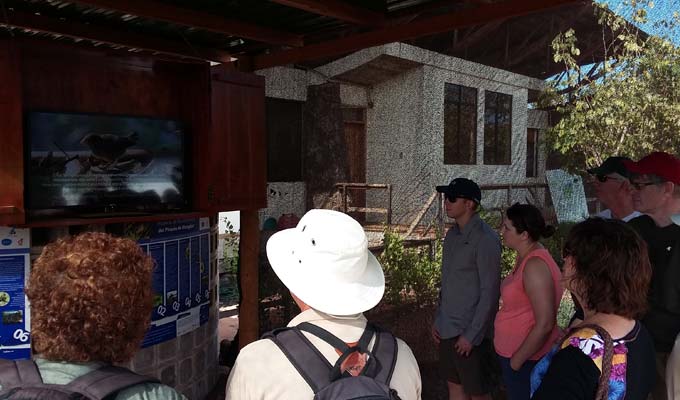 The mangrove finch is classified as critically endangered

Mini radio transmitters were attached to the birds prior to their release to track and monitor their success rates. Over the next few weeks, the birds were found interacting with other individuals of their species and also displayed similar dispersal and foraging behavior as birds reared in the wild. Furthermore, while the majority of the individuals stayed around the aviary, eight of the finches flew 1.5 km to forage in arid zone vegetation.

After a few weeks, the trackers were removed from the birds, making monitoring the populations much more difficult due to their enigmatic nature. Despite this, several of the finches released in 2014 and 2015 have been sited, demonstrating that the birds born in captivity are able to survive long-term. The results from this release were excellent news for the Charles Darwin Foundation, as it showed that getting a head start could be an effective method for protecting the species. In just three years, 36 mangrove finches have been released into the wild. However, these efforts are mostly to keep the population viable in the short-term. For long-term conservation, the foundation plans to further solidify population numbers by translocating birds to new habitats.

The newly renovated displays at the Charles Darwin Research Station devote a very well-conceived info booth where video footage brings guests closer to the understanding of the Galapagos Darwin Finch realities, including its conservation program. Maps and other visual displays also assist in the overall understanding.  While these facilities are now open, the full opening of the new visitor complex is expected by mid-October.