Galapagos Albatrosses on Española Island: Return of the Long-lost Mate 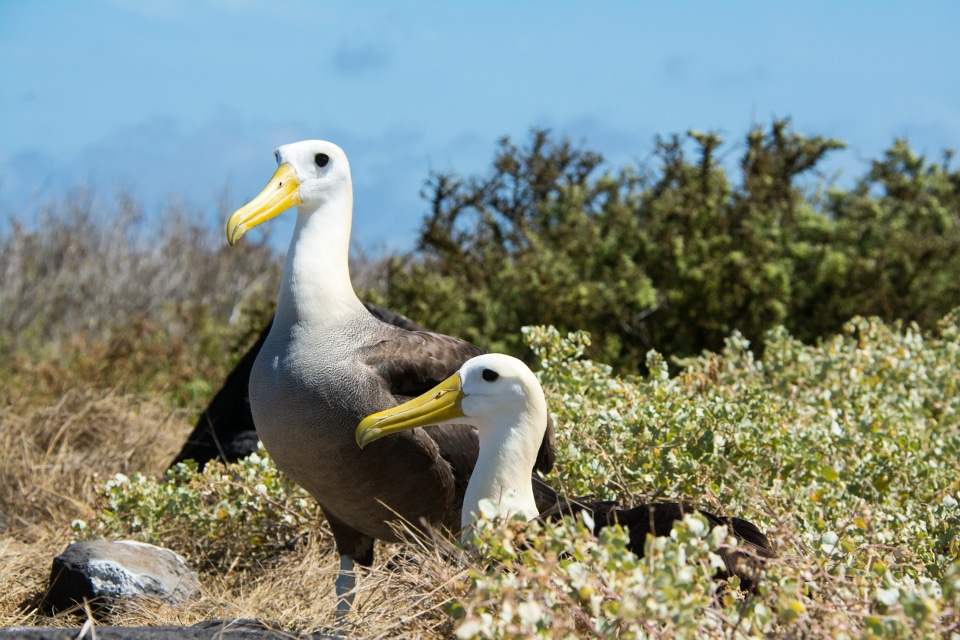 It’s that time of the year again when Galapagos albatrosses have their eyes set on Española Island for one very special thing, and one thing only. It’s a pretty big deal for all albatrosses on Española Island, and it’s definitely worth mentioning given the fact that we’re just getting reports of the groups of them arriving en masse to begin the courting process.

The presence of albatrosses on Española Island is one of the rare natural behaviors in the whole archipelago that involves the mass migration of an endemic bird to a single place. What this entails is a vast congregation of lovers that have spent a year apart, and now eagerly hope to meet each other once again.

It’s majestic to observe the flight of these creatures as they make their way to Española, given their impressive wingspan that measures up to 2.5 meters (8.2 feet), making it the largest bird in the Galapagos and one of the biggest marine birds in the world.

In addition to this, they also live to be remarkably old and are regarded as one of the longest-living birds in the world – some have even lived up to the age of 66!

Between the months of March and April however, Galapagos albatrosses make their way in droves to the island of Española, hoping to catch the attention of the albatross ladies with some rather sophisticated displays of courtship. It is one of the few species of birds that mates for life and, consequently, is very particular and selective with respect to its mate (especially the first time!). Almost every mating season, Galapagos albatrosses on Española Island tend to pair with the mate they had the previous year, making it a pretty monogamous bird (although 25% of albatrosses “dabble” on the side and find an extra pair to mate with).

Between mid-April and July, the female albatross will lay an egg that typically hatches around two months later.

Imagine being unable to distinguish a former partner based on their looks, but instead being quite adept at recognizing them based on how they move. This is how the Galapagos albatross remembers its former partner, the same one it flew all this way to reconnect with once more. Almost like having a long-distance love that’s finally been fulfilled!

The courtship display that ensues to verify their previous companion is one to write home about. The Galapagos albatrosses get into the swing of things by repeatedly whacking their beaks together in a curious cacophony of sound that’s interspersed with occasional squawks and brief pauses that consist of teetering on their legs and pointing up at the sky. The idea here is to use their dance as a “fingerprint” of sorts that allows them to recognize if this is indeed the partner they coupled with the previous year.

Video by: Rauken
Spectators of this scene are presented with a rather charming and entertaining display of “judgment” that revolves around a medley of these unusual “percussion instruments.”

In April, aboard the Santa Cruz II Galapagos cruise eastern islands itinerary you will get the chance to visit Española Island – the only island where the Galapagos albatross can be found!

Albatrosses are not the only animals you will see during your Galapagos trip. Galapagos giant tortoises, red-footed boobies, Galapagos sea lions, sea turtles (just to name a few) are some of the wildlife you will definitely have a chance to get a glimpse of. All of these are part of our BIG15 iconic species, too!