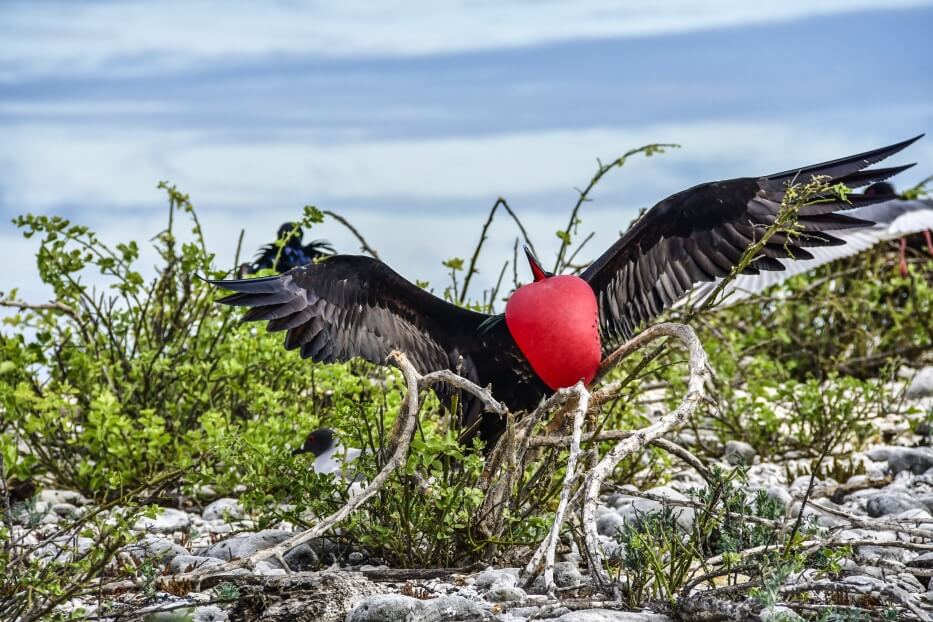 If a picture is worth a thousand words of us humans, then a shade of a single color is worth a thousand words for the female frigatebirds. June, in particular, is a common month to see the male Galapagos frigatebirds inflating their bright-red pouches up towards the skies, as they hope to catch the eye of the critical female frigatebirds flying overhead. Their pouches consist of gorgeous hues of red and serve as breeding flags, excitedly informing the females up above that they’re on the market.

The Art of the Pouch: A Galapagos Frigatebird Courting Display 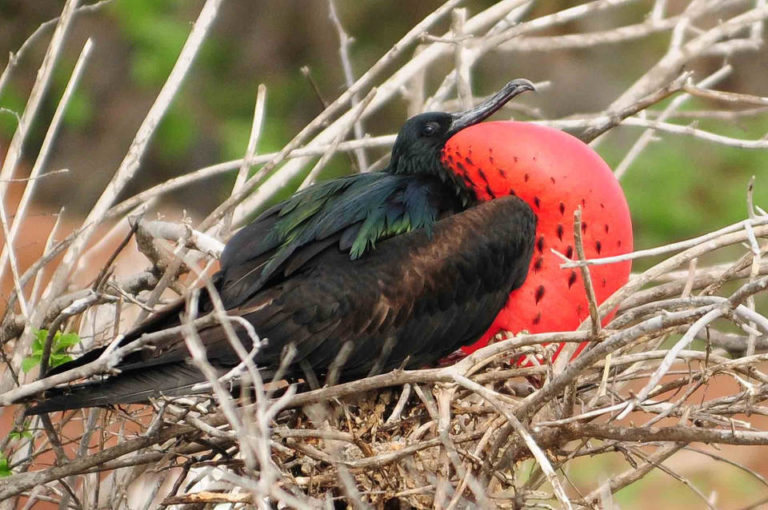 One of the main reasons it’s not uncommon to see frigatebirds inflating their pouches during this time of year is due to food supplies reaching their peak, typically right before they taper off during the oncoming dry season. Like a utopian society, these opportunistic breeders know to mate when the times are pretty good, and environmental conditions are ideal. Aboard the Santa Cruz II Galapagos cruise, you’ll get to see the frigatebird (both great and magnificent) on the Western and Northern Galapagos itineraries.

The males don the impressive gular sacks, which appear to be leathery balloons and make for one of the most eye-catching features of Galapagos birds, especially when it comes to visiting the breeding colonies. These leathery, red pouches serve as a crucial factor in the selection process of females flying overhead, which are busy scanning the males as they fly overhead. On the ground, males spend an average of 30 minutes gradually inflating their pouches to eventually have them serve as beacons of fertility to draw in the female. In addition to this inflated display of courtship, the males extend their wings and shake them vigorously while moving their head from side to side. Once the female has chosen her mate, she will swoop down and partake in the mating ritual.

After copulation occurs, the male typically tends to gather up sticks and bring them back to the female as she constructs a nest using guano as a form of glue to keep the sticks together. Often times, these nests are found up in trees or in bushes, but should these not be available the nest will usually end up on the ground.

Only one egg is laid and gets incubated by both birds for roughly 2.5 – 3 months. Chicks are born with a soft, white down and are constantly guarded by the parents during the initial month. Parents then feed the young frigatebird for the following 5 to 6 month period, after which the father stops participating and yields the effort of upbringing to the mother, who will go on to feed the young bird for the following six to nine months.

As a result of this rather long and interdependent process that sees the upbringing of the baby chick, frigatebirds will only usually breed once every 2 years.

In this video, you can see how the courting process occurs between female and male frigates: