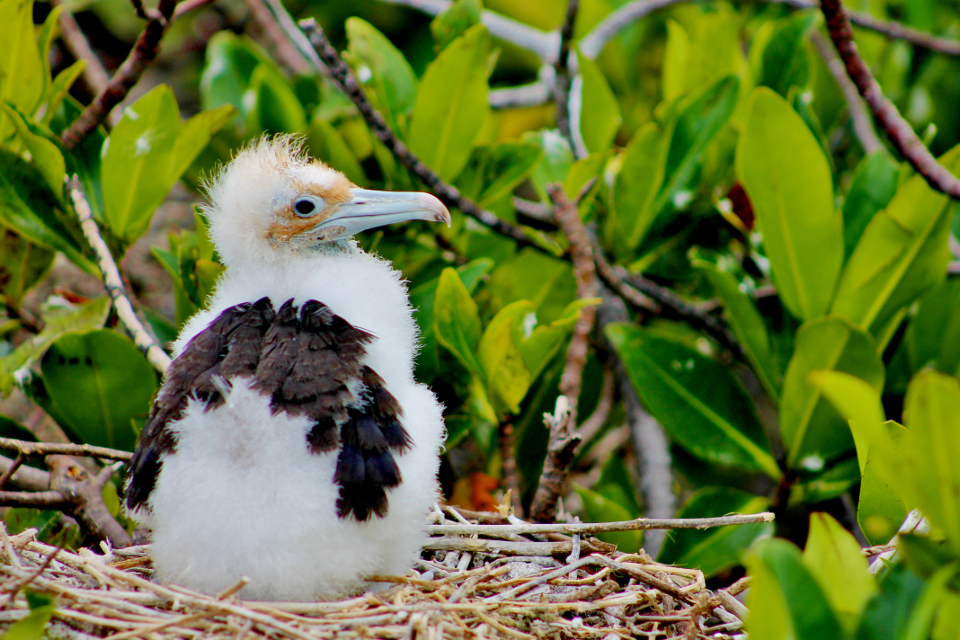 Summer may be on its way out throughout much of the northern hemisphere, but that doesn’t mean the fun has to stop here in Galapagos! Nor does it ever have to stop, for that matter: there’s always something to be seen in Galapagos, no matter the time of year! What better way to celebrate the last days of summer than by checking out the cute hatchlings that belong to the frigatebirds of Galapagos! ‘Tis the season for frigatebird chicks!

After an extravagant courting ritual (see below) that can last anywhere from 2 to 3 months and a rather long incubation process that typically begins in March, frigatebirds in Galapagos (both magnificent and great) welcome their tiny counterparts to the family. These tiny frigatebirds look nothing like their parents upon hatching, instead they come out of with a soft and white down plumage that almost makes them look like the wrong baby to the wrong family.

One of many frigatebird chicks during hatching season.

Nevertheless, the parents know it’s theirs and do their utmost to protect their tiny frigatebird chick at all cost, making sure that any opportunistic eaters don’t swoop down and seize their young on the off-chance that they’re not present. Both parents take turns heading outwards in search of food while the other guards the fledgling. This process goes on for anywhere from 5 to 6 months before the father frigatebird spreads his wings and flies off for good, leaving the mother to take care of the young bird (feeding it, mostly) for the remaining six to nine months.

Beauty is on the Pouch of the Beholder

Rewind a couple of months, and you’ll come across what is perhaps regarded as one of the most extravagant and winged displays of courtship throughout the Galapagos. Male frigatebirds tend to attract their female counterparts by inflating their bright-red pouch into considerable sizes.

These gular sucks, which end up looking more like leathery balloons by the time they reach their maximum size, dot entire breeding colonies during earlier months throughout the year, when food supplies are at the highest levels of abundance. Magnificent and great frigatebirds are opportunistic breeders, and consequently, they only mate when conditions are satisfactory for mating.

Why inflate the iconic red pouch? Well, it turns out that females have a knack for males with the largest and most vivid and saturated hues of red, using it as a marker for what male deserves their attention and, with any luck, their fertility.

Males not only inflate their pouches but also partake in an amusing and energized display that involves extending and vibrating their wings while tilting their head from side-to-side sporadically. Should their gambit be adequate enough, the female will descend from the skies and pick the mate she thinks is best.

Our Western and Northern Galapagos itineraries allow guests to get up close to the frigatebirds (both great and magnificent and a BIG15 species) throughout the archipelago.