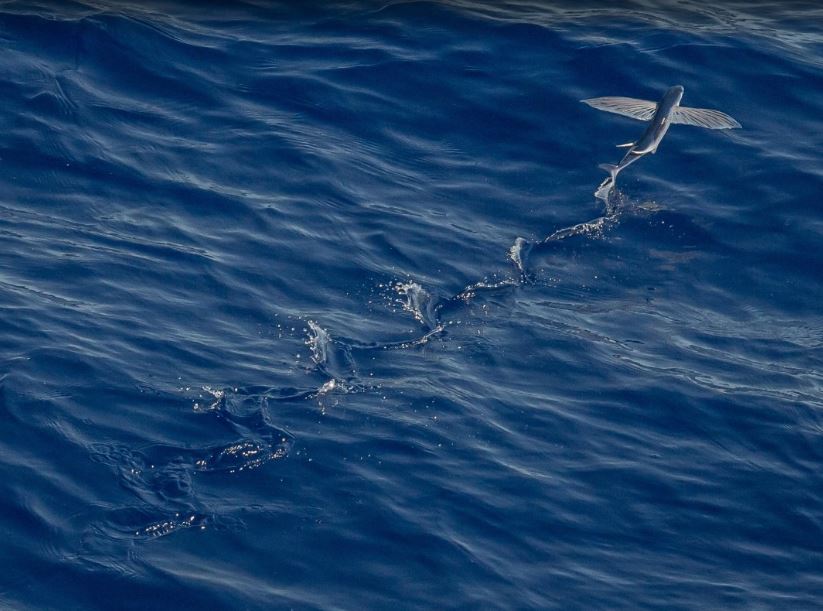 Fluttering and splashing about in of the ocean like haphazard skipping stones, flying fish in the Galapagos frequently pop up from the deep blue waters to the surprise and delight of our guests. It’s not all that uncommon to see them splashing up around the sides of the Santa Cruz II Galapagos cruise and, occasionally at night, guests might even be lucky enough to spot a group of white-tip reef sharks frequenting the sides of the Santa Cruz II in order to partake in a buffet of flying fish in Galapagos!

Video courtesy of the BBC

Perhaps the name itself is a little misleading, for these fish don’t necessarily fly in the common sense of the word. Instead, flying fish in Galapagos display what might best be regarded as “gliding” over the Galapagos waters. What one might perceive as wings are actually gargantuan pectoral fins. With the help of their tail (which acts as a propeller of sorts, capable of beating up to an impressive 50 times per second!), flying fish in Galapagos are capable of reaching speeds of up to 30 mph/48 kph before launching themselves out of the water and extending their fins. This unique ability allows them to travel for hundreds of yards/meters in order to flee the tenacious and quick predators that chase them under the sea.

Pelagic birds in the Galapagos won’t hesitate to seize the opportunity to swoop down and snatch these flying fish in Galapagos, making for an extremely hectic situation when it comes to evading predators both underwater and overhead. Often times they’ll accidentally fly right into the waiting mouths of big birds such as frigatebirds, red-footed boobies (both of which are members of our BIG15 group of iconic species in Galapagos), and red-billed tropicbirds.

One can only imagine how these fish came to be on an evolutionary timeline. Perhaps it started with a large school of fish in which some had slightly larger fins than the rest. Upon being chased by predators, only those with larger fins managed to successfully getaway. Smaller-finned fish got eaten, larger-finned fish survived and managed to reproduce with one another. Upon being chased by larger-finned predators, these same fish began resorting to leaping out into the air while attempting attempt to escape their pursuers, these of which ended up increasing their chances of escape as well.

One remarkable feature to stem from this process of evolution is the presence of fully broadened neural arches, these of which act as insertion sites for muscles, tissues, and ligaments found throughout a fish’s skeleton. In the end, the presence of these broader neural arches allows flying fish in Galapagos to keep their bodies nice and rigid while in the air, which assists them in giving them aerodynamic properties when out of the water.