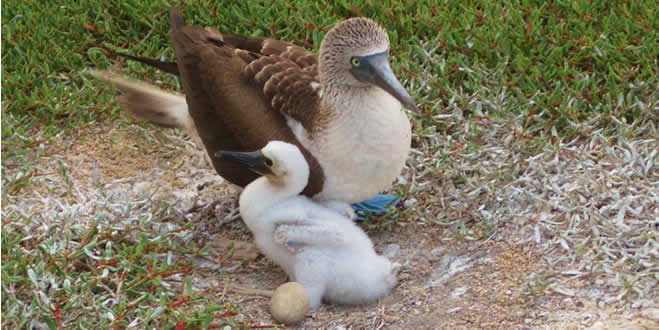 Blue-footed boobies are large sea birds (70-90cm in length with a five-foot wingspan) that breed along the eastern coast of the Pacific Ocean, from southern California to Peru. They are more widely known for their dramatic plunge-diving, brilliant blue feet, and the stunning mating dances that hopeful males display for prospective females. These beautiful pelican-like boobies are certainly the most famed and frequently seen of the Galapagos birds, yet of all the boobies the blue-footed actually has the smallest population and it has recently been discovered that their numbers are decreasing.

It is relatively simple to distinguish the sexes of the Blue Footed Booby by both sight and sound. Although it is only the effect of additional black pigmentation around the pupil, the eye pupil of the female appears to be larger than that of the males. Their calls, on the other hand, are perhaps easier to distinguish as the male emits a high whistling sound whereas the female has a low honking call. Mates communicate with each other by calling and are actually able to recognize one another based on these sounds as each individual has its own particular call. The female also tends to have darker blue feet and weighs slightly more than the male.

Galapagos blue-footed boobies are one of the islands’ endemic species.

The blue-footed booby is a seemingly young species that has evolved in isolation on the Galapagos Islands. There are currently two known subspecies of blue-footed boobies, which were named taxonomically in 1882, the year Charles Darwin died. The Sula nebouxii nebouxii is recognized by its slightly smaller stature, while the Sula nebouxii excise has a slightly duller color. This bird is a part of the family Sulidae, which includes ten species of long-winged seabirds, and also belongs to the genus Sula, along with five other species of boobies. The Peruvian booby is the closest relative to the blue-footed booby, and due to their similar ecological and biological features, it is believed that the two species split only recently.

Fun facts about the blue-footed boobies.

Ready to start dreaming up your Galapagos Islands tours?

Talk to a Galapagos Expert!