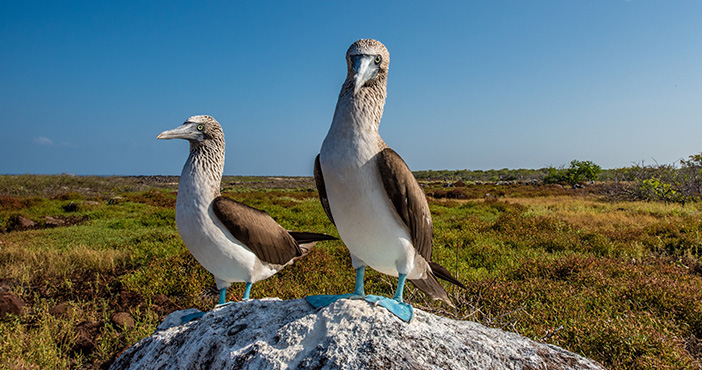 Are you into cute and fluffy baby birds? Then you will love what the winds are bringing with them this month of July. If you’ve heard a little about the magical Galapagos archipelago, you’ve probably heard about some of its most iconic Big15 species, like the Galapagos giant tortoise, the frigate, and of course, the emblematic blue-footed booby. This beautiful bird, famous for the gorgeous shade of blue on its feet and its funny courtship dance, is also one of the most prolific of the booby family. Red-footed boobies lay only one egg, and Nazca boobies can lay two, but the practice of siblicide (when the stronger sibling kills the weaker one in order to ensure its own survival) occurs with the latter, meaning only one chick survives. On the other hand, blue-footed boobies lay up to three eggs! And unless there are predators on the lookout, all three have the chance of surviving. However, the survival of the fittest is the rule of evolution and in the Galapagos, life continues to evolve every day. While traveling through the archipelago in a Galapagos cruise, you will certainly get a chance to spot some of these baby birds, so have your camera ready!

During your stay in Galapagos, it’s very likely to spot blue-footed boobies with their nests.

Right after the eggs hatch, all chicks look exactly the same. The blue-footed booby, not being particularly good with its sense of smell, has to find some other way to recognize its chick amongst so many others. This is why they resort to the guano ring. It doesn’t sound too pretty, but it actually makes for a very useful visual aid. Once the adult blue-footed booby has found a nice, flat spot on the ground, it stands in that same spot all day, turning in its own axis, and pooping its white guano as it pivots. This circular motion creates a guano circumference that works as a borderline to mark its territory and creates a nesting area for its future babies. Because blue-footed boobies do have a visual memory, they know which guano ring is theirs. When it comes to feeding its young, it will know which chicks to supply nourishment to by feeding only those inside its ring. The guano ring is only used to mark territory during hatching and nesting season.

Life Inside and Outside the Ring

When a blue-footed booby mother lays three eggs, she doesn’t lay all of them at the same time. The eggs are usually laid 4 to 5 days apart. When the eggs hatch – also with a 4 and 5-day difference – there is no visible difference between chicks. However, because they grow so fast, after 3 weeks, very noticeable physical differences become evident. The oldest tends to be significantly larger than the youngest. Before their fourth week, blue-footed booby chicks’ instinct prevents them from leaving the ring. After their fourth to the sixth week, they have already developed a visual and geographical recognition of the nest. If for some reason, a chick is pushed from its nest or strays from it, it will instantly become prey to mockingbirds, Galapagos hawks, and frigate birds that are always on the lookout for unattended or strayed chicks.  Even if a baby booby has not left its nest, but is left unguarded for as little as a minute while its parents change guard, a mockingbird will swiftly catch it before the parent can return. These series of dangers that the chicks are exposed to are what survival is all about, and survival determines the natural selection. The strongest and smartest survive, while the weakest and less-aware-of-their-surrounding-dangers, perishes.

Blue-footed boobies get their characteristic feet color from their diet.

The moment a blue-footed booby chick is born it has no feathers. Its exposed skin makes it very vulnerable to the heat and scorching equatorial sun. Until its first feathers grow (also called down feathers) the parent place the chick on top of its cold feet while protecting it with its body from the sun. After the first days, some down feathers will gradually start covering the chick’s body, giving it that sweet, fluffy look that everyone goes crazy for. Actually, its down feathers can grow so big and fuzzy that the chick might even appear to be bigger than its parents, but it’s actually not. By the third week, it starts to slowly change its down feathers into juvenile plumage. However, they are still not very pretty looking. In fact, between their fifth and ninth week, the blue-footed booby chick is at its ugliest. A combination of old down feathers, juvenile feathers, food scraps, and guano don’t make for a very favorable look either. By week 10 it’s almost 90% covered in juvenile fathers. It won’t be until after a year that it will lose the juvenile coat and swap it for an elegant-looking adult plumage. And what’s more? It will have to wait another 6 months before it gets its blue feet!